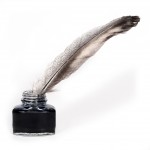 The Irish limerick is an important, and sometime very humorous, part of the Emerald Isle’s unique culture.

The first limericks were not as risqué as our modern-day versions, which are often full of double-entendres or overt and decidedly adult content.

In fact, early limericks were often used to entertain children at bedtime. These classic nursery rhymes consisted of five lines with a specific form and rhythm.

These short poems are believed to be named for the town where they were first written..Limerick, Ireland…

The first limericks are thought to be the work of a group known as the Maigue poets, who created verse in the 18th century.

Today’s bawdy limericks can also be traced back to the pubs and watering holes of Ireland…where patrons would construct the “dirty” verses to entertain their audience.

However, some limericks have actually gone into the language…Shakespeare himself included limericks in classic works such as the famous tragedy, Othello:

“And let me the canakin clink, clink;

And let me the canakin clink

A soldier’s a man;

A life’s but a span;

Why, then, let a soldier drink”

The most famous composer of the traditional limerick was not William Shakespeare, the Bard; instead, it was a man named Edward Lear.

Although Lear was of English birth (born in Holloway in May, 1812), this artist, writer, and poet is commonly regarded as the master of the Irish limerick.

Some of his most famous verse comes from his work, The Owl And The Pussycat (published in 1871), which is known as a “nonsense poem”.

They dined on mince, and slices of quince

Which they ate with a runcible spoon;


And hand in hand, on the edge of the sand,


They danced by the light of the moon,


The moon…they danced by the light of the moon.

The Limerick – Form And Style…

A classic limerick will always have a stanza made up of five lines. The 1st, 2nd, and 5th lines will usually rhyme.

The 3rd and 4th lines of the limerick are generally shorter than the others. Emphasis of words is also an important component of this art form, and often, the anapaest meter (which goes, Ta-Ta-Tum) is part of the distinctive rhythm.

In limericks, the first line will tend to refer to a place or a person, with the location appearing at the very end of the line.

In older limericks, the 1st and 5th lines were often the same, but this practice is less common today.

Limericks Are Still A Popular Pastime…

The Penguin Book Of Limericks includes a special five-line limerick about the…limerick itself (written by O.E. Parrott):

The limerick’s birth is unclear:


Its genesis owed much to Lear.


It started as clean,


And this split haunts its later career.

These funny little poems are accessible to anyone, and they can be created with relative ease. They add a touch of the Irish storytelling tradition to the everyday…why not write your own limerick today? 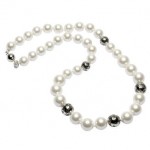 There are many ways to enjoy your Irish heritage on a daily basis, whether or not you enjoy crafting bawdy limericks…

This beautiful pearl and silver Celtic necklace features engraved Trinity Knots. These ancient symbols have appeared on Irish and Celtic art treasures and monuments since the sixth century.

For classic beauty that is a pleasant reminder of where you came from, consider an authentic, handcrafted strand of pearls created in Ireland itself. For more special Irish and Celtic designs, visit our online Celtic jewelry store.