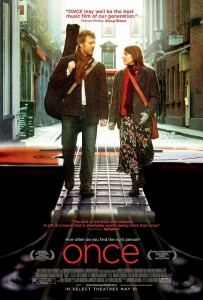 In 2007, the Irish independent film, Once, won an Oscar for the best original song, “Falling slowly;” a song created especially for the film. The song accentuates the film’s humanistic elements: the chance encounters and surprising intimacies that sometimes come when strangers meet. The film is about two musicians trying to survive in Dublin, who share a passion for music and a desire to have their voices heard.

The leading man, a nameless man, who humbly fixes vacuums for a living, chances upon a young, foreign mother needing his services– when magic occurs. They sing, play and record together. Together, they embark on a professional and personal relationship, both complex and beautiful. A relationship that acts as an interstice between their real life affairs and relationships. Their story reveals the highs and lows of short-lived love affairs known so well among those traveling, soul-searching individuals, going from place to place even if those places be internal ones. 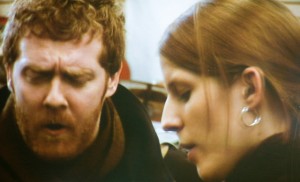 During the filming, the real life actors, Irish-born Glen Hansard, and Czech native, Marketa Irglova, acted in the streets of Dublin and nearby location for three weeks for the film’s production, which had a small expenditure of only one-hundred thousand dollars to make the film (O’Kelly, Declan).

Outside the set, Hansard and Irglova also proved a match. So too did Hansard’s band The Frames, in a similar fashion, spark like wildfire after the film’s success. As Hansard remarks, the movie was not only a personal jettison for himself as a struggling musician but for many just like him. Upon receiving the Oscar, Hansard said:

This is such a big deal, not only for us, but for all other independent musicians and artists that spend most of their time struggling, and this, the fact that we’re standing here tonight, the fact that we’re able to hold this, it’s just to prove no matter how far out your dreams are, it’s possible,” said the Czech with the Irish brogue. (O’Kelly, Declan) 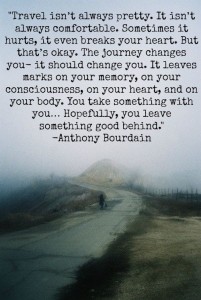 Yet the tale is in fact bittersweet. It is one that doesn’t equate to forever. Places, memories and loves that imprint the mind forever, are not lived out to that same eternity. By the way that each of the characters are faced with reality–they each must put their love aside for means of survival, responsibilities, etc. As the lyrics to “Falling slowly” do indicate an impossible longing: “I don’t know you. But I want you more for that;”  “Falling slowly eyes that know me and I can’t go back”

Once reveals the splendor of half-meetings that at first glance may seem unfinished, tragic or incomplete; yet somehow they reveal the intricately woven short-stories, so ephemeral that only through music may they be remembered.