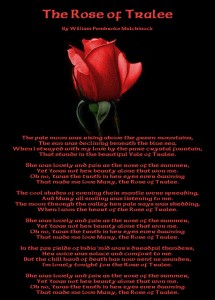 The 19th Century Irish Ballad “The Rose of Tralee,” was written by William Mulchinock a wealthy protestant merchant who fell in love with Mary O’Connor, his maid, and a woman who was considered below his station. In the lyrics, Mulchinock tells a tale about his voyage to India–about leaving his love behind. Upon return, he found out about her passing and wrote”The Rose of Tralee” to share the goodness and beauty of his special person departed.

The Rose of Tralee Festival, named after the ballad, takes place in Co. Kerry every year, is a beauty contest that was first called “Tralee’s Carnival Queen.” By the late 1950’s however Mulchinock’s ballad was commemorated as a fore-piece of the celebration, which named  a rose every year for the one he had lost. According to the pageant website, the post WWII emigration that had stilted the contest participation was rejuvenated by the Rose of Tralee focus (Rose of Tralee International Festival). Also, the rules  which restricted the pageant contestants to being Kerry natives, expanded to include all persons of Irish descent. 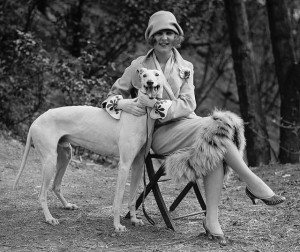 That meant that descendant in America, Britain, and other countries could participate in the naming of the rose. Meanwhile, the ‘Miss America’ pageant in The United States started in 1921, with Margaret Gorman of Washington, D.C.’s crowning as the first “Miss America.” Featured in the photo with her greyhound, Long Goodie, Miss Gorman is said to have been of Irish descent, whether she was aware or of it or not (J.J. Lee, Marion R. Casey).

As the source notes: “The name Gorman, a variation of the Gaelic surname O’Gorman, was principally associated by 1890 with Ireland’s counties Antrim, Dublin, and Tipperary” (J.J. Lee, Marion R. Casey). 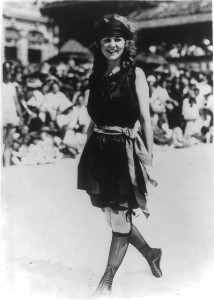 Before the Miss America Pageant was in existence, Miss Gorman left crowds in awe as the “Inter-City Beauty” and “The Most Beautiful Bathing Girl in America.” Yet her voraciousness for life and lust, seemed only part of her nature. The same element perhaps that Mulchinock’s Rose of Tralee had about her, an authenticity and inherent grace. After her crowning, Gorman said: “I never cared to be Miss America. It wasn’t my idea. I am so bored by it all. I really want to forget the whole thing” (Mattiace, Peter (1980-09-02).)

Another example of her humility, comes from the friends she associated herself with. As one source relates:

Her victory was big news back in Washington, making all the newspapers. One amusing story that of a telegram she received from one of her high school friends back in D.C. It read: “Congratulations. Don’t get stuck up.” To make it even better … the telegram was sent collect, with the delivery boy asking for 35 cents upon receipt. (Margaret Gorman: First Miss America and Washintonian) 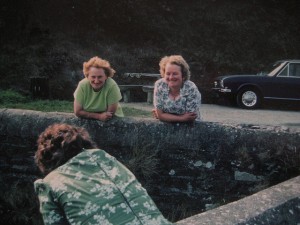 The Rose of Tralee, spurred from the simple lyric, has created  quite a pageantry around it. Yet both the song and the competition sway to the same assurance: that anyone has the chance to shine past the limitations of this life, with a goodness like Mary O’Connor’s, despite any humbleness of origin.