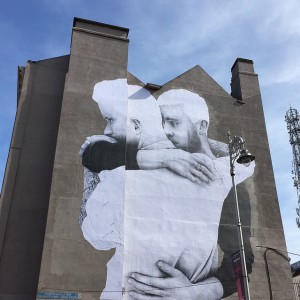 Ireland, a country of fighters, union supporters and individuals coming together to optimize power, has recently passed a unanimous vote to legalized gay marriage. From the May 22nd referendum, Ireland has become the first country to embrace homosexual love coast-to-coast. And if the parades in the streets aren’t enough, there is evidence of a town, Dublin town, being painted with pride and zeal enough to impart a lasting image of a gay couple embracing on Henry Street.

The mural’s only impediment, the weather, has washed away the hard work but not the effort well done. As an organizer reports:

After all the hard work of you lot, I’m afraid to say it’s been for nothing. Apparently, the mural was a little less sturdy than we originally thought. Due to heavy rain earlier today, half of the mural has been washed away. Don’t for a second let this deter you or feel like this was a wasted venture. This petition showed me 1 very important thing, The citizens of this country, and indeed this world, are some amazing people, who are not willing to sit down and take inequality of people as if it’s something deserved. (Matthew Skwiat) 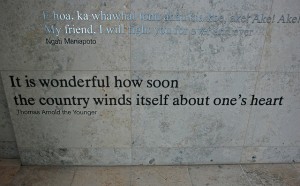 A portrait of a marriage gained is a portrait now lost; even so, there is a lasting affect on the Irish supporters, who thrive in a new-found environment of acceptance and at the very least, tolerance, which without a doubt must makes their world lighter.

Now, up to the chopping block the definition of marriage is placed. Whether it be a marriage of love, a marriage of rights, a marriage of timing or opportunity, it seems that if the general equation is one of love, the possibilities are endless. Made apparent by the public demonstrations in Dublin and all over the world, a whole nation celebrates the sharing of a most common ceremony and tradition. Its hard to mistake the benefits of: an more ageless, timeless, non-discriminatory acceptance of love in general. 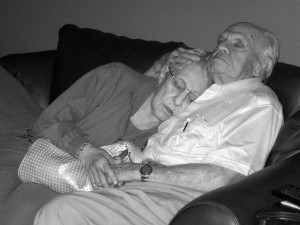 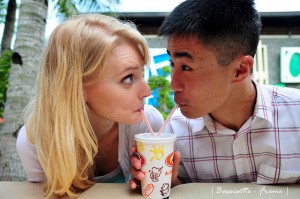 When public art and community collide, something new is created. A culture is born. The mural in Henry Street, inspired by Frederic William Burton’s “The Meeting on the Turret Stairs,” is one example. The image stays in the mind past the wreckage done by the weather.

Another example of community and art embracing, was demonstrated on another rainy day– when the creative director of Coca Cola, Bill Backer, landed in Shannon, Ireland, after a heavy storm that bore a delay in his English destination plans (Skwiat, Matthew). While waiting in Shannon, Backer and his colleagues shared a few cokes in commonality and laughter,when an epiphany struck his creative genius. He later recalled:

[I] began to see a bottle of Coca-Cola as more than a drink that refreshed a hundred million people a day in almost every corner of the globe. So [I] began to see the familiar words, ‘Let’s have a Coke,’ as more than an invitation to pause for refreshment. They were actually a subtle way of saying, ‘Let’s keep each other company for a little while.’ And [I] knew they were being said all over the world as [I] sat there in Ireland. (Backer, Bill)

Art, ads, and murals, direct a static connection to the emotional side of the human spirit. They tell a story of how we are not in the human experience alone. What if same-sex marriage came about as widespread and expedient as a coke commercial? When in the company of people sharing a common need for love and belonging, it’s difficult not to feel something beyond definition.