Irish travelers, also referred to as tinkers or gypsies, are said to have broken off from the “settled” Irish about a thousand years ago. They have a long history as craftsmen and tradespeople. As one source notes, “the sound of a hammer hitting an anvil,” warranted them the nickname of “tinkers” (Rock, Lauren). 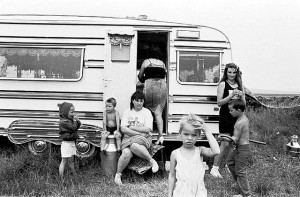 The author and photographer of Irish Travellers, Alen Macweeney, compiled photographs in his book that depict the itinerant life in dramatic portrayals. Macweeney, a Dublin native, grew a strong interest in the travelers when he came across one of their encampment: it was a field of caravans, horses and sheds on the outskirts of Dublin in Ballyfermot.

The people captivated him from the start with their lives, their hardships, and especially their unyielding endurance. He spent six years visiting them, drinking tea with them, listening to their stories, and hearing their songs. In his book, Macweeney writes of their life: “Theirs was a bigger way of life than mine, with its daily struggle for survival, compared to my struggle to find images symbolic and representative of that life” (Macweeney, Alen). 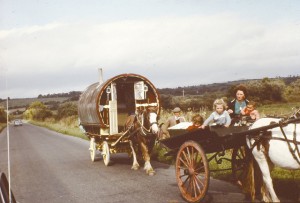 The photographs stun those not enmeshed in the lives of the itinerants. In his book, one photo shows a girls with a plastic sack covering up her face; another, a little boy in a bowler cap, riding a pony through a disembodied encampment. The reins are tight in his hands and he is leaning back in a way that seems to represent a strength that’s seemingly too great to be his own.

Macweney writes about a traveler named Joe and his relationship to a woman named Olivene, which was an uncommon relationship because Travelers typically married young and braved the hardships of the nomadic life together. Joe had been married once before and was left broken-hearted. As the source notes, he had chased his wife all the way to the town of Longford, where she had run off with another man shortly after they wedding. And as Macweeney writes:” [Joe] beat him with two slaps” and said, “You can keep her now, I don’t want her” (Macweeney, Alen, 2).

Joe and Olivene, two settled itinerants, lived with a different type of longing than that of lost love.  As the article notes, the travelers that finally “settled” in camps after so long on foot, yearned tremendously for the freedom of those on the road. Macweeney writes:

I never connected boredom with living in a house until I saw the numbing effect the static life of house dwelling has on Travellers. Running water, heat , and a toilet come at a high price against the loss of freedom and the nomadic life.

It is hard to imagine the daily struggles the Travelers faced at the time Macweeney accompanied them in the 60’s. He writes that they were old before their time. It was not uncommon for very young girls to hold babies in their coats–begging on the streets with the distinctive look of the Traveler in their eyes; a look that, he says, speaks of vulnerability (Macweeney, 5).

It was vulnerability he admired so much in his new friends. And if vulnerability and freedom go hand-in-hand, it seems that those continually plagued with hardship, such as the Travelers, are the most alive of all. 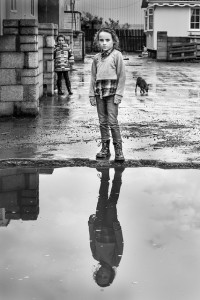