The Leprechaun is an exaggerated symbol the world associates with Ireland. For instance, it might be just as welcoming for a stranger to spot a leprechaun as it would be a spot of tea, on arrival to the Emerald Isle. Yet, the stories of “little people” are diverse in their origins, not associated only with Irish folklore, but also with Native American myth among other nationalities.

In Ireland, the leprechaun is said to have originated as far back as the 8th century in “The Saga of Fergus mac Léti” (Reid, Sean).  According to The Irish legend of the leprechaun and the King of Ulster”, the early version of the leprechaun was called the lúchorpáin or “little bodies.” These lúchorpáin were the same who captured Fergus, the high king, as he slept near the beach–and drug him into the sea. The king awoke and captured the tiny sprites, who then granted the king three wishes in exchange for their release. One of the king’s wishes was to breath underwater. 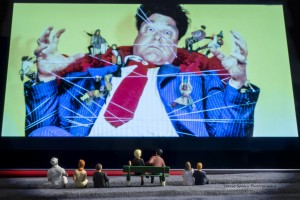 Just as in “The Saga of Fergus mac Léti,” the little people are said to be commonly found near bodies of water, such as Great Lakes. One example is the Native American story, “How Morning Star Lost Her Fish.” In the story, the little people appear, once again, as both the trouble bearers and the helpers. The main character in the story is not a High King, but a little girl with the world at her fingertips. Her name is Morning Glory and she wakes bright eyed every morning to run light-toed through the meadow to the river, where she sets about her salmon nets as always.

On most days, she scoops up the salmon to carry back to the fire for breakfast. However one morning her routine changes, when the Little People, who are called the Jo gah oh, release the fish from the net. They tell the girl, “Fish, like Indian girls, like to be alive” (Powers, Mabel). From then on, Morning Glory has a respect for how much her own life means to her–and how much it must mean for the fish also. 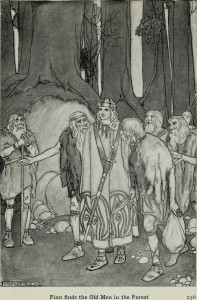 In “The Legend of the Salmon of Knowledge,” another Irish lore, the salmon was thought to possess the unimaginable knowledge. He who ate a portion of the salmon, would then become the most knowing person in the world. Finegas, who was a poet, sought for many years to catch the fish with no luck. The fish evaded him and escaped his line. When a young apprentice named Fionn arrived, the fish had turned old man Finegas asleep. Finegas had caught a glimpse of the salmon’s eye, making his own eyes shut.

Before this happened, Finegas told Finn to not look at the fish. He told him if he did catch the fish, to not to taste a morsel of it. While the old man slept, Fionn captured the fish and was cooking it over the fire when a spark of hot burning caught his finger. He brought his finger to his mouth and tasted the salmon of knowledge by mistake. By that measure, Finegas awoke and granted the boy permission to eat the rest of the salmon. By his tolken, Finegas watched the young man became the strongest and wisest warrior of the land.