The Beara Peninsula off the south west coast of Ireland is one of the most fascinating for its history of coal mining. When the Allihies mines shut down in the late 1880s many of the men working in the mines migrated to Butte, Montana, which was named the “the richest hill on earth” by Marcus Daly (Stevens, Kevin). Daly was one of the copper kings. He established the Anaconda mine in Butte to which so many migrated. Daly was also of Irish decent, born in County Cavan. He traveled to New York City as a small boy. In his early years, Daly saved his money selling newspaper in order to move to California in time for the gold rush and stake his claim at Virginia City, Nevada–which acted as a very prosperous outpost of the mining boom. 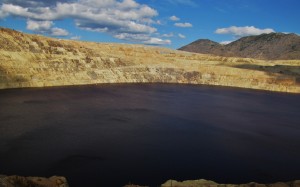 The Anaconda Copper mine in Butte prospered for many years, as well, due in part to Daly’s decree. According to the Cork Mother Jones Festival website, “Butte was beginning to experience the boom times that Allihies had experienced seventy years earlier and the miners and their families followed the work and the money” (From Allihies to Butte, Montana). The journey to the north western United States was over six thousand miles and many did not survive. However, enough did survive to pronounce Butte as the 5th province of Ireland and ready the unionist fights that came to follow. Unions, women’s rights, and worker parties, were strongly supported by the Irish population.  In 1917, conditions for the Irish worstened however when a terrible catastrophe broke lose and 166 men were killed in the Anaconda mine explosion.

Among civil disrest and during the wake of the first World War, America’s backing with Britain, compared with Ireland’s seemingly endless conflict with Britain, created  division between the working class Irish and the industrialists in Butte (Stevens, Kevin). Still, life in Butte prospered at the time, even through hardship, and was a very different story than the Anaconda mine of today–placid in a toxic residue that is too hazard for even the birds to approach.

An Spailpín means a wandering laborer–the type that were popular throughout the 1900s. Perhaps those type of laborers took up what was left on the Peninsula after so many had migrated. Those who stayed on the Beara Peninsula must have experienced quite different lives. Some family members stayed behind and were later sent to join the others in America. Some were not. For those who did remain on Beara, they did not seek better lives in new lands, but relied on good health to carry them through the demands of the day-to-day. Life today is perhaps no such struggle as it was in the early days– with the toils of the laborers and miners who fought for sustenance home and abroad.

Today, the boatmen who ferries people across from the mainland to Beara require only a quick penny, a small toll on the outbound. However there is a heftier price to pay on the homeward journey. It is only something to consider, that the road home is never so easy to find as it was in going.