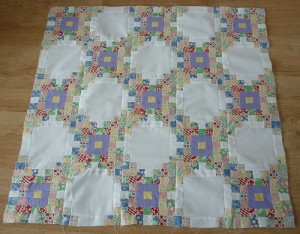 There’s just something special and heartwarming about the process of selecting fabric and then working it through your hands as you create a blanket or a quilt.

Irish quilting has a history dating back to the 18th century. Some say the date was 1804 while others say it was really 1814. In the United States, this quilting pattern began popping up in the 19th century and it has taken the U.S. quilting community by storm since then.

The craft was first more readily available to wealthier women before it became accessible to the middle and lower classes. The process of quilting used to be considered a chore, but it is has now turned into an enjoyable hobby. 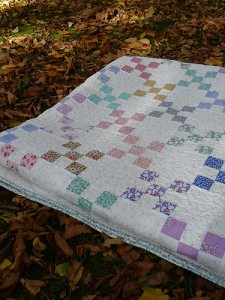 This one often goes by other names, but most know it as the Single Irish Chain Quilt. This would be the version for beginners to tackle, since it is the easiest design of the three. The pattern is beautiful no matter what experience level it falls under. This one requires two different fabrics and two different blocks, the blocks should be about 12″. 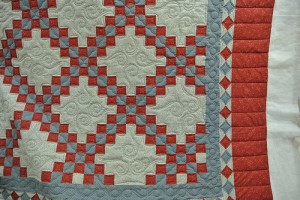 This version gains a bit more difficulty and the color choices should be carefully considered so that the pattern is allowed to pop. This version requires three different fabrics and two different blocks, the blocks for this pattern come in at around 10″. 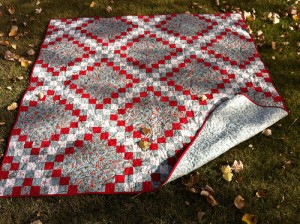 This is the version for experienced quilters or quilters who have a significant amount of time to dedicate to creating a heirloom piece. For this one you’ll need four different fabrics and two different blocks. The size of the blocks for the Triple will be around 14″.

Check out this website for a fantastic guide to creating any version of the Irish Chain Quilt.

The quilt that gained its name after a measuring tool that was characterized by having small squares and stripes has turned into a phenomenon in the United States. The variations for these quilts are limitless and the gift of this quilt will be cherished for a lifetime. There are many, many great resources online for the creation of this quilt. Happy crafting!