Home > Blog > Culture & Travel > The Best Women for the Job, Emain Macha and the Debility of the Ulstermen

Cú Chulainn is one of the fiercest, most infamous warriors of Irish mythology. He is an Ulstermen and a hero, who fought fearlessly defending his land and himself against the threat of invasion, the threat of change. That being said, he was said to transform wildly during battle, so that his face would distort into what is known as his infamous “Warp Spasm.” To explain the height of his physical change, Tomas Kinsella translates from the pre-Norman Irish epic, The Táin that “[Cú Chulainn] sucked one eye so deep into his head that a wild crane couldn’t probe it onto his cheek out of the depths of his skull; the other eye fell out along his cheek.” 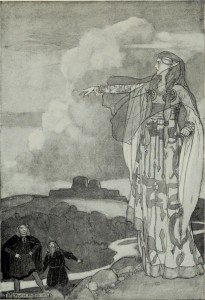 Or as Ben Thompon describes the phenomenon in more modern terms:

“a violent bloodthirsty berserker rage which caused his face to contort into hideous positions…and prompted one of his eyes to bulge out of his head, making him look sort of like the “pwned” face

Although Cú Chulainn was disfigured, he was seemingly immune to the pain of battle. His self-composure was a feat which greatly impressed the prophets. They foresaw an early death and a bright flaming life, many compare to the Greek hero, Achilles. In the epic Táin Bó Cúailnge (“Cattle Raid of Cooley”), he was also the only man from his province, who was not affected by Macha’s curse–which was supposed to inflict every man in Ulster with labor pains right during his worst moment of battle.

Yet, behind  Cú Chulainn’s disfigurement, is another story. It seems behind every story of a great hero is a woman’s tale and Macha’s tale is like none other. It begins with Crondchu. Crondchu is noted as a solitary man who lived alone in his bothy along the hills, who was long widowed, when a beautiful woman came to him mysteriously one day. Her name was Macha and when she arrived in Crondcu’s house, she  cleaned it, made his fire, and put herself down beside him as his wife. Life was very happy for the couple until Crondcu soon found out that Macha had magic in her and could run faster than any horse. At her urging, he promised her he would keep her secret. 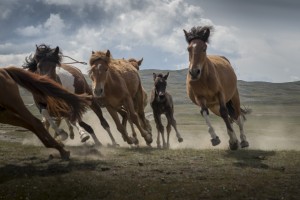 However, one day when Crondcu went to join the courts, he started bragging with the other men. He let the secret slip to the men in town that his wife could beat the horses in a race. Immediately after, the men tied him there, holding him prisoner until the feat of Macha could be proven. Macha was summoned. She begged the men of the courts not to make her race the horses. She begged for herself and the baby she carried inside her, but their ears were deaf and her love for Crondcu strong, so they pushed her to the starting line.

Macha raced the horses and won. At the finish line, she gave birth to two twin to whom the double hill features of the Navan Fort in Northern Ireland is still named today. It is called Emain Macha or “the twins of Macha.” 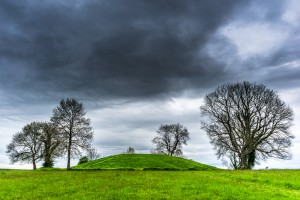 After giving birth, Macha perished, just as Cú Chulainn had and left the dust to settle in the awe of those witnessing.

Since the day in his youth, when Cú Chulainn killed Calann’s hound and took its place as bodyguard and protector of the fort, there was no other but him exempt from Macha’s curse. From that time he gained his name, meaning”Culann’s hound,” and the onlookers stood ready for him to reveal himself against adversity.

Similarly, Macha’s secret, exploited for the amusement of the Ulstermen, was something those same Ulstermen perhaps wished never to have tampered.

As the saying goes, something must be given for something taken. The placement of the woman inside the household becomes arbitrary when her power is more useful in transforming the outside world. This just goes along to prove, along with Cú Chulainn’s bulging eye, sometimes there are powers so great their dimensions don’t fit neatly inside boxes, homes or bodies. They fit better into myth.