Letter to the London Times from an Irish Immigrant in America, 1850

I am exceedingly well pleased at coming to this land of plenty. On arrival I purchased 120 acres of land at $5 an acre. You must bear in mind that I have purchased the land out, and it is to me and mine an “estate for ever”, without a landlord, an agent or tax-gatherer to trouble me. I would advise all my friends to quit Ireland — the country most dear to me; as long as they remain in it they will be in bondage and misery.

What you labour for is sweetened by contentment and happiness; there is no failure in the potato crop, and you can grow every crop you wish, without manuring the land during life. You need not mind feeding pigs, but let them into the woods and they will feed themselves, until you want to make bacon of them.


I shudder when I think that starvation prevails to such an extent in poor Ireland. After supplying the entire population of America, there would still be as much corn and provisions left us would supply the world, for there is no limit to cultivation or end to land. Here the meanest labourer has beef and mutton, with bread, bacon, tea, coffee, sugar and even pies, the whole year round — every day here is as good as Christmas day in Ireland.

It’s a glowing letter of the sort that were often published in newspapers back in the Old Country, partly to lure people over to work on the Transcontinental Railroad, and partly to settle the West. But what did the immigrants find when they arrived in New York and Boston, in the mid 1800s? They found that if life had been hard, with landlords who cared more for money than they did for human life, it wasn’t much better on these shores.

The Atlantic Ocean was not a pond that could be flown over in a matter of hours, in a jet airplane. It was six weeks of living in cramped, filthy quarters, on ships that had been built to transport goods, not people. Many of them died on that crossing. Many of us have stories of relatives who did not make it across, as diphtheria and typhoid fever were common on those ships.

Back in the Old Country, relatives often pooled their resources, so that a young man or woman in their family could have the cash to buy a ticket, to make the crossing. The dream was to build a successful life in the land where the streets were said to be paved with gold, and all you would have to do, was gather some of it up in your basket, and you would have as much as you would ever need, enough to live in the lap o’ luxury for the rest of your days.

However, those who stayed behind soon learned that, more than likely, they would never again see those brave young men and women who were going to America to make their fortune. Their good-by parties came to be known as American Wakes.

When those early immigrants arrived in this country, they found conditions that were as bad, or even worse than the ones they had left. The Industrial revolution was only beginning to rear its head over the landscape. A that time, jobs back east mostly consisted of stevedores on the wharves, maids and servants in wealthy homes, crafts in the home, and outright begging in the streets. Living conditions were rough; certainly not something to write home about in glowing terms, such as described in the letter above.

Even so, few of our Irish Immigrants chose to go out west. Most of them stayed in Boston and New York, where they formed neighborhoods that became famous. These were places where families looked out for each other, and children grew up knowing that if both their parents were working, someone down the street was at home and would look out for them.

The people who lived there were survivors. They were tough and creative, and they were not afraid of work. Just think of the legacy so many of the people who came out of those neighborhoods gave us, people like; Eugene O’Neal, F. Scott Fitzgerald and Oscar Wilde. The politicians, like Al Smith and John F. Kennedy.

Wherever we go, we leave a mark we can be proud of. 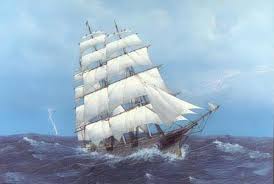