When the Irish came to America they managed to bring a few precious things with them, including some songs, recipes and the will to survive in this country. But upon stepping off the boats many were met with high prices, little work and unwelcoming natives. So many Irish continued their journey past the port cities moving south or inland to Appalachia.

There they made a life. There in the forests and the shadow of the mountain they could play the music of their homeland, loud wild and free. It was here that some of the widest reaching and least expected Irish impacts upon American culture began.


Country music is currently one of the most listened to types of music but it’s beginnings have a bit of the brogue. Those early Scotch-Irish plucked their fiddles composing sad songs about the harsh daily life in the frontier which led the music to eventually be referred to as mountain or country music.

Some standards composed then including “Cotton-Eyed Joe” and “Buffalo Gals” were adaptations or corruptions of Irish tunes.

The banjo had arrived with slaves and soon made it’s way around the country but it was not until someone decided to play a Celtic fiddle tune on a banjo that the foundation for bluegrass was laid. There were also plenty of songs about lost loves, husbands and wives run off, murder and of course, the grease to slide a body through anything, whiskey. 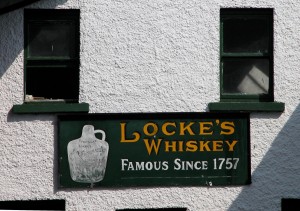 Whether praising it or fearing it, whiskey was a focus in song as a tradition and a fixture of mountain life. The music was not all for dance halls and taverns though. Many of these rich harmonies were practiced as a distraction from the busy work of the still. You see while the Irish brought their spirit and their music, there was no way to bring all the whiskey it would take to build a world.

That would have to be made.

An Irish’s work never done, they set to making stills and, using traditional recipes, making moonshine or Poitin. They lived in isolated areas rich with corn and flowing water and moonshining was an easy way to make money in a poor part of the country.

Easy, if one were willing to take the risks.

Revenue officers were out to get anyone making their own liquor and not paying tax on it.  But business boomed and a young America lapped it up. To meet the need of the day bootleggers had to be fast. So cars were customized to hold more shine, move faster and better handle tight mountain curves. The first stock cars were born. 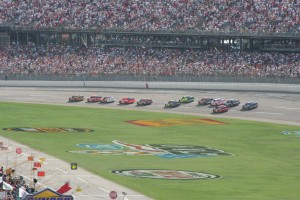 It happened after a while that shiners would do runs together to better evade the Revenuers. They had fun with it and eventually one bragged to another that they had the better car. They were literally off to the races.

Today, NASCAR is now the second most watched American sports franchise behind the NFL and hosts some of the highest attendance numbers of any sporting event. It’s all a product of bootlegging. Some of it’s earliest drivers earned their stripes driving the twists of the mountains, running in ruts of Scotch-Irish descent.

So the next time you see the crowds gathered around the speedway, a little bit of fire in their cups, a guitar at the tailgate look upon this good lazy time steeped in the sweat immigrants. The next time you hear someone taking a shot at this “redneck culture”, smile knowing they should damn well blame the Irish.