A recent survey pinpointed Ireland’s top ten most revered tourist towns – the number one pick will be selected in November 2014.

To help you discover these inspiring Irish locales, which offer an intriguing blend of natural beauty, historical sites and modern amenities, we’ll take a look at each town during a special, ten-part blog series.

This lovely seaside town is situated in County Waterford.

During its off-season months, it features a population of just three hundred and thirty people.

To help you learn about the beauty of this unique place, we’ve compiled an entertaining quick guide.

Once you learn about Ardmore, you may just be tempted to make it your next tourist destination… 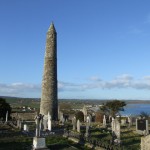 Renowned as the Emerald Isle’s oldest Christian settlement, this coastal town was once the home of Saint Declan (around 316 A.D.).

This Irish Saint is believed to be the first person to convert the Irish to Christ.

The town became a Christian place very early on, before the time of Saint Patrick.

These days, traces of Ardmore’s ecclesiastical past are still very visible.

For example, a round tower rises above the town, adding significant drama to the landscape.

This simple and striking tower is part of the ruins of what is now known as the Ardmore Old Cathedral.

These sorts of medieval towers were commonly built on monastery or church grounds and they were utilized as bell towers and/or places of refuge.

The round tower of Ardmore’s ancient Cathedral is thought to have been built between the eighth and thirteenth centuries.

Other ruins from the Old Cathedral feature exquisite carvings of uniquely Irish symbols, such as harps, as well as Christian imagery (such as a skilful depictions of Adam and Eve).

In addition, Ogham Stones are found at this historical site. These stones feature an ancient Irish written language.

It’s believed that Ogham script was utilized by the Irish because it was not easily understood by the country’s enemies, such as the Vikings…

The Round Tower and Old Cathedral ruins that we just talked about are undoubtedly Ardmore’s most impressive and popular tourist attraction.

After all, these ruins allow visitors a glimpse back in time, to a very different age…

However, there are plenty of other fascinating things to see and do in this picturesque town.

If you’re up for a little adventure, enjoying a cliff walk which leads you to St Declan’s Well and Oratory will make for a memorable outing.

Since St. Declan, who was a prince of the Decies tribe, established the monastery in Ardmore, visiting his Holy Well may be very meaningful.

The well is found in the foremost section of the cliffs, which loom over the village proper.

According to legend, Saint Declan would come to the well in order to collect his thoughts and pray. When you visit the well, you may do the very same…

Of course, all is not historical in this seaside enclave. You may also enjoy modern pleasures, by exploring the pretty village with its shops, galleries, eateries and pubs, or participate in outdoor activities, such as kayaking and hiking.

While checking out the village, be sure and head into the Ardmore Gallery and Tearoom, on Main Street. This popular location is the perfect place to admire art while you enjoy a cup of tea.

Treat Yourself to an Ogham Wedding Ring 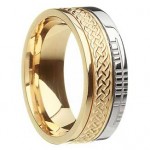 Now that you’ve learned about the wonders of Ardmore, with its ancient ruins, mysterious Ogham stones and towering cliffs, why not celebrate the beauty of Ireland by choosing a traditional Celtic wedding band?

Our Celtic Knot and Ogham Wedding Style Band features elegant knot work which symbolizes eternity, as well as Ogham script which translates to the word, “Faith”.

Each ring is available in a range of fine materials, from affordable sterling silver to luxurious gold.

Our rings are handmade right in the Emerald Isle, by craftspeople who carry on the centuries-old tradition of masterful Irish metalwork.

Choose a two-toned design for high contrast or go for a yellow gold, white gold or silver finish.

This comfortable ring is meant to be cherished forever and it’s a perfect way to connect with your own Gaelic heritage.