If you love Ireland, you’ll enjoy reading about the nation’s latest news and events.

These days, there is plenty happening in the Emerald Isle, from socio-economic shifts to political changes to tourism.

Once you’ve perused this topical blog post, you’ll have a deeper understanding of this charming country’s current culture, as well as its future direction…

While Ireland is commonly associated with ancient history, such as legacy of Saint Patrick (who is depicted in lovely and colourful stained glass work, in the image displayed at left), the nation continues to evolve into the future.

That being said, it’s safe to say that the ancestral past of the Emerald Isle will always echo through the nation”s modern age.


What’s Happening in the Emerald Isle? 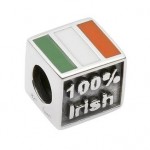 This week, Bono is stepping up to defend the country’s notoriously low taxes, which are the subject of plenty of debate and controversy.

In order to share his views, Bono (singer of famous Irish rock band, U2), who is well-known for his political activism, spoke at  the Clinton Global Initiative meeting, which was held near New York City’s Times Square.

In the rock star’s opinion, the low taxes of the Emerald Isle are a boon to capitalism.

His views are not new to the public arena. Recently, during an interview with a British newspaper reporter, he remarked that, “My father was Labour, classic Dublin Northside household. And I still carry that with me.

And though I believe that capitalism has been the most effective ideology we have known in taking people out of extreme poverty, I don’t think it is the only thing that can do it, and in some ways I wish it wasn’t.”

What do you think? Do you agree with Bono?

Be sure to leave your own opinion on Ireland’s tax laws in the comment field below. We’d love to hear what you think about this important issue.

If you’re into European Football, you’ll be interested to learn that a celebration which honoured Dublin’s All-Ireland Football champions was held this week in Merrion Square.

During the festivities, tons of fans were on hand to applaud the team, whose members all showed up in order to display the Sam Maguire Cup.

Dublin trounced Mayo in the All-Ireland final, thereby claiming a second championship in just a trio of seasons.

Irish Prime Minister, Enda Kelly, was also on hand in order to enjoy the event, as was Irish Minister of State, Michael Ring.

Due to its troubled history, Northern Ireland may not be perceived as a place where illegal immigration is a hot-button issue. However, as of late, the region’s Home Office has been making a concerted effort to detain those who inhabit this part of Ireland illegally.

On September 24th, 2013, the Home Office conducted a raid on malls in a variety of Northern Ireland areas – Belfast and Londonderry are examples.

This “sting” operation was large in scale, and it was designed to detain foreign nationals who were working illegally in mobile phone accessory kiosks.

Nine arrests were made, and more may happen in the future. Detainees hailed from Pakistan and India. 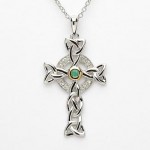 Now that you’ve learned more about Ireland news and events, why not celebrate the country’s past by choosing your own Diamond & Emerald Silver Trinity Knot Cross?

This pendant honours the nation’s Christian past. However, it’s central ring may be a remnant of Ireland’s Pagan age.

It’s believed that Irish priests used the ring because it was a Pagan symbol of sun worship. They thought that adding the ring would entice Pagans to convert to Christ, because the symbol was familiar.

Affordable and handmade right in the Emerald Isle, this dazzling pendant is meant to be treasured for a lifetime.