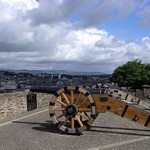 Many tourists bypass Northern Ireland during their Emerald Isle travels, due to the area’s notorious and troubled history.

However, it is rather sad that this part of Ireland is so often overlooked, as it is bestowed with enormous beauty, heritage and character.

In particular, Derry (one of Northern Ireland’s premier cities) provides visitors with something truly special.

If you’re planning a trip to the Emerald Isle, learning about this exceptional city and its features may be enough to inspire you to add Derry (also known as Londonderry) to your holiday itinerary.

Now, let’s take a look at what Derry, Northern Ireland has to offer…

During the 6th century, a Christian monastery was erected on a slope of Doire (Derry, in Old English), just east of the scenic River Foyle.

According to local legend, permission to build was given by a regent who owned a fortress in the area. Known as the monastery of Doire, this religious compound was run by Ireland’s famous saint, Columba.

Saint Columba established many monasteries in the Emerald Isle during the Early Medieval Period, such as Durrow Abbey.

From these spiritual beginnings, Derry rose as a community. However, like so many Irish cities, the area was subject to Viking raids. Luckily, Derry was never destroyed by these attacks.

At the advent of the 12th century, Derry and its environs became the home of Norman colonists.

During the 14th century, the Earl of Ulster, Richard de Burgh, acquired Derry from the city’s bishop, and it became yet another aspect of the Earldom of Ulster, until this Earldom fell apart. 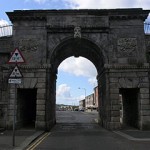 Within Derry, the famous Walled City of Derry (Londonderry) remains the subject of fascination.

Since the Walled City of Derry is the sole remaining walled city in Ireland, it continues to dazzle and inspire.

The Walled City was erected around 1613, in order to provide security to settlers who hailed from England and Scotland.

No visit to Derry is complete without a stroll around this historical and charming city.

Other Things to See and Do in Derry

Inside the building, a range of artifacts are displayed, which are relics from the Siege of Derry (the Williamite War of 1689).

Named for Derry’s most famous religious personage, this edifice was erected in 1633, by William Parrot. Its tower and central building feature a Planter Gothic Style of design.

This important museum details the civil rights campaign that came about during the 1960s, as well as the Free Derry/early Troubles era (early 1970s).

If you’re interested in discovering the timeline of Derry’s civil right movement (including the Battle of the Bogside, Interment, Free Derry and Bloody Sunday), you’ll find that this fascinating museum is the ultimate resource.

The museum has an archive of over 25,000 individual items which relate to this period in the city’s history. When visiting Derry, be sure to immerse yourself in the modern history of the city, by spending time at this wonderful museum. 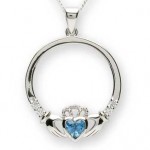 If you’re looking for a unique and meaningful way to honour your own Emerald Isle heritage, you’ll love wearing our Silver Claddagh Birthstone Pendant.

This elegant, sterling silver design is handcrafted right in Ireland. Each pendant will be stamped at the Assay Office of Dublin Castle.

So affordable, this design is meant to be enjoyed for a lifetime.

When you select this traditional piece of jewelry, you’ll be able to choose your own personalized birthstone (or select the birthstone of someone that you care about).

Perfect as a treat to yourself, or as a present for a special lady who has Irish heritage, this resonant Claddagh symbol is a uniquely Irish expression of love, loyalty and affection.