Occasionally, we take a trip back in time, to the Ireland of yesteryear…

Our “Ireland in the Year…” posts are inspired by an Irish documentary television program, Reeling in the Years, which highlighted political events and cultural trends from specific years in Irish history.

In 1980, Ireland enjoyed some positive exposure, when one of the country’s talented singer/songwriters, Johnny Logan, won the prestigious Eurovision Song Contest.

His tune, “What’s Another Year?” beat out tunes from all over the globe, and it heralded Ireland’s first victory in this annual competition.


During May of 1980, a medieval work of art known as the Derrynaflan Chalice was uncovered from its hiding place in an Irish bog.

The chalice is stunning to behold, as it features elegant examples of intricate and symbolic Celtic knot work.

Believed to date back to the 8th century, this priceless artifact is a masterpiece of Insular Art.

Check out Reeling in the Years for 1980

Watching Reeling in the Years is one of the best ways to capture the essence of Ireland’s past.

This popular documentary series featured a unique style that made it very watchable. Short snippets of news, accompanied by captions and video footage, are interspersed with pop music hits of the day, as well as lighthearted commentary on trends.

Be sure to watch the YouTube clip shown below, in order to appreciate all that Reeling in the Years has to offer…

Tragedy struck in the early autumn, when the Buttevant Rail Disaster occured. This accident claimed the lives of eighteen people.

In October, two thousand men and women ran the RTE Radio 2 marathon, which was held in Dublin City.

Later in the year, social change came to the Emerald Isle, as the National (Family Planning) Act became law, allowing Emerald Isle citizens to access birth control by prescription only.

This marked the first visit by a British PM since Ireland achieved independence.

The Irish Hit Parade was filled with unforgettable rock tunes in 1980, such as Pink Floyd’s Another Brick in the Wall and The Police’s Don’t Stand So Close to Me.

Another hit tunes for this year included the Pretenders’, Brass in Pocket, and Abba’s Super Trouper. 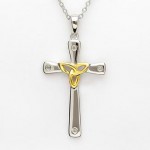 Our Diamond Silver Trinity Knot Cross Pendant is handcrafted right in the Emerald Isle, for true authenticity, and it features a Trinity Knot symbol that represents Father, Son and Holy Spirit.

Made from sterling silver, with a touch of gold plating and a smattering of sparkling diamonds, this elegant design is a perfect way to honor your own Irish heritage.

When you choose this affordable Celtic Cross design, you’ll wear one of the Irish people’s most beloved symbols. The Trinity Knot motif dates back to the Early Medieval Period.

To show your faith and connect with your Emerald Isle roots, order this exquisitely crafted pendant today.

Available for just $99.00, this lovely piece of jewelry makes an ideal gift idea, and it’s the perfect way to celebrate Ireland.