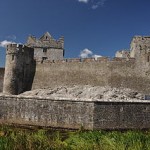 If you’re fascinated by the Emerald Isle’s colorful history and rich culture, you’ll enjoy learning more about one of the country’s most majestic fortresses.

Cahir Castle is situated on an island, surrounded by the scenic River Suir (this river is known for its superb fishing).

This structure was built way back in the tenth century, by Conor O’Brien, the Prince of Thurmond.

Now relocated to the middle of Cahir town, this simple and elegant castle is a popular tourist attraction for the Irish, and for visitors from all over the world.

Cahir Castle is open to the public, so anyone may visit the fortress and drink in its Early Medieval Period atmosphere.


Guided tours and an on-site audio-visual display offer visitors plenty of things to see and enjoy.

When it comes to touring a truly authentic, truly ancient castle, a trip to this striking stone edifice will be well worth your time.

This Tipperary-area castle has a dramatic history.

However, these days, it’s probably best known as the set used for one of the pivotal battle scenes in the medieval flick, Excalibur.

As one of the Emerald Isle’s biggest castles, this 10th century, man-made wonder has been inhabited by a range of noblemen and their clans.

By the twelfth century, the castle passed into the hands of James Butler, who was the Earl of Ormond. He received the castle as a reward for his ongoing friendship with King Edward the Third.

During the 15th century, members of the esteemed Butler family, who controlled the castle and its surrounding lands, became embroiled in the Elizabethan wars. The Butlers fought on the side of the Roman Catholics.

During this pivotal period, the castle was taken, during a violent, 3-day siege. The Earl of Essex’s army stormed the castle, and then managed to hold onto it for twelve full months.

During the fifteenth century, the castle was the backdrop for a murder, when Lord Cahir’s son-in-law killed a distant family member, James Pendergrast, because of an argument over money.

Cahir Castle fell under siege again, twice, during the Irish Confederate Wars. Today, it belongs to the Irish State.

Now that you know more about the fascinating history of Cahir Castle, why not plan a trip to Tipperary, Ireland to see it for yourself?

Celebrate the Beauty of Irish History with a Traditional Claddagh Ring 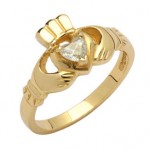 Irish romance and history will be at your fingertips when you treat yourself, or your lady love, to our exquisite 14k Ladies Diamond Claddagh Ring.

Designed to evoke Ireland’s medieval past, this traditional Claddagh ring features a genuine diamond center, in the shape of a heart.

Echoing the design of the very first Claddagh Ring, which was created as a token of affection, back in the Early Medieval Period, this beautiful ring captures the essence of the Irish, in shining 14k gold.

Choose a yellow or white gold finish to suit your preferences, and enjoy Irish beauty that is meant to last a lifetime. Each of these rings is stamped at the Assay Office of historic Dublin Castle.