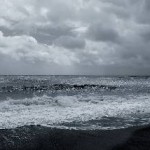 If you’re fond of Irish mythology, you’ll enjoy learning about the epic Voyage of Bran.

This story came into being during the Early Medieval Period, and it remains one of the Emerald Isle’s most beloved folk tales.

Commonly perceived as the inspiration for stories of Saint Brendan, who also undertook a famous voyage, this tale features the supernatural and mystical elements that are such a powerful part of Irish medieval storytelling…

In the beginning of the story, Bran mac Feabhail is taking a walk…

While he is walking, be becomes enchanted by strains of lovely music. The tunes are so soothing that they soon cause him to lie down and doze off.


When he wakes up, he spies a gorgeous branch crafted of fine silver.

After returning to his own home, a female from the Otherworld makes an appearance, and she begins to sing a ballad that describes the place the branch came from.

Like the lady herself, the branch comes from the magical Otherworld, where the weather is always sunny and fine.

Bran learns that the Otherworld is a veritable paradise.

The Quest for the Otherworld Begins…

In this mystical place, no one wants for anything, and no one grows ill or sad. The perfect residents of this idyllic land are truly blessed, and Bran is fully intrigued.

At the woman’s urging, he commences to plan a quest to the Otherworld, in order to see this paradise for himself. He takes his best men along with him, for protection, and to share his adventures at sea.

During the first days of Bran’s journey at sea, he comes across a male who rides a chariot across the waters. This man is named Manannan mac Lir.

Manannan lets Bran know that many other chariot-riders are also present, although invisible. He also tells him that the chariot-riders see flowery plains below them as they ride, rather than frigid sea waters.

During this supernatural encounter, Manannan commands that Bran father a son in the Emerald Isle. During this unusual conversation, Manannan reveals that Bran’s son is destined to become a powerful, successful warrior.

After Bran says goodbye to Manannan, he continues on, until he encounters the Isle of Joy. At this enchanted place, all of the residents chuckle and laugh at him, and then ignore his pleas for conversation. Put off by the strange people, he turns around and sails on.

His next stop is the Land of Women. Again, he and his men are reluctant to go onto the land.

However, the head of this tribe of females throws a ball of yarn at Bran, which becomes affixed to his own hand. Then, she uses this ball of string to pull him ashore.

Eventually, one of Bran’s men, Nechtan Mac Collibran, begins to pine for the life that he left behind. Despite protests and curses from the female leader (which are directed at Nechtan), the men assemble and prepare to set sail for Ireland.

Once they arrive in the Emerald Isle, they are veritable strangers to their own people. Nechtan Mac Collibran, who was cursed, turns to ashes upon the shores of his beloved Ireland.

Bran and his men tell stories of their adventures to the Irish people that they meet, and then set sail again. No one ever hears from them again. 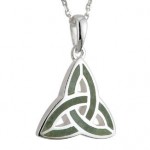 Our stunning Silver and Connemara Marble Trinity Knot Celtic Pendant is a perfect expression of your own Irish heritage.

Crafted from elegant, dark-green Connemara marble and fine sterling silver, this signature design is handcrafted in Ireland for true authenticity.

Adorned with a Trinity Knot motif that symbolizes Father, Son and Holy Spirit, this pendant is as meaningful as it is beautiful.

Perfect as a treat to yourself, or as a gift for a special lady, this pretty design is an ideal way to celebrate the uniqueness of Irish culture.