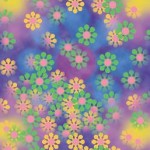 Occasionally, we take a trip back in time, to the Ireland of yesteryear.

Our “Ireland in the Year…” blogs are inspired by an Irish documentary television program, Reeling in the Years, which spotlighted some of the most important political happenings and cultural trends from particular years in Irish history.

This time, we’re going to look at the Ireland of 1966. At this stage, the people of the Emerald Isle were fully immersed in the Swinging Sixties, with all of its Flower Power and social revolution…

In 1966, Irish citizens grooved to the number one hit, Day Tripper, as performed by the Beatles.


They also enjoyed Nancy Sinatra’s cheeky novelty hit, These Boots are Made for Walking, which highlighted female independence.

A spirit of freedom and social change characterized this period, as youth continues to rise up and demand a more liberated existence, free of the social constraints of the past…

The old guard in Ireland were less than enamored of this new “youthquake” attitude, so clashes between old and young were inevitable.

For example, In February of 1966, a woman’s lack of propriety during a television interview (she said she didn’t wear a nightie on her wedding night) provoked the ire of the Emerald Isle’s straitlaced Bishop of Clonfert.

During March, the 1920 ambush at Kilmichael, County Cork was commemorated with a new memorial.

In 1920, this ambush, which was the work of the Irish Republican Army, occurred during the Irish War of Independence.

Bloodshed and terrorism were still happening in Ireland, even during the peace and love “Flower Power” era. In 1966, Nelson’s Pillar on Dublin’s O’Connell Street was blown to bits, in order to mark the fiftieth anniversary of the Easter Rising.

As you can see, the Troubles showed no sign on abating during this year. Their legacy continued to trigger new outbreaks of violence.

During 1966, a variety of ceremonies marking the Easter Rising occurred. In April, President de Valera opened a new Garden of Remembrance in Parnell Square, Dublin.

In Belfast, parades by republicans were a common sight…

To check out Reeling in the Years for 1966, be sure to watch the YouTube clip posted below…

More Highlights of Irish Life in 1966

Ireland’s orange, green and white flag, which was flown over the Dublin General Post Office since 1916, was given to Taoiseach Sean Lemass by the British. This ceremony took place in London, England on March 31st.

On a lighter note, Irish citizens enjoyed the re-opening of the rebuilt Abbey Theatre, which had gone up in flames fifteen years prior. 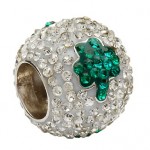 If you love collecting new charms for your Tara’s Diary Charm Bracelet or Pandora charm bracelet, why not add a special charm that shows your own Irish heritage?

Our lovely Tara’s Diary Green Shamrock and Crystals Charm is adorned with glamorous crystals that give it amazing shimmer and shine.

You may choose from the green and white design shown at left, or opt for a purple and white charm.

Available for just $57.00, this delightful piece is crafted of fine sterling silver and high-quality crystals.