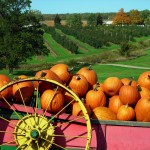 Many of the Halloween traditions that we honor today have their roots in the Celtic New Year celebration known as Samhain.

In medieval times, the Celtic New Year began on October 31st, and it was honored with a series of Samhain rituals. During this night, Celtic people believed that spirits rose from the dead and communicated with the living…

Typical Samhain rituals practised in the olden days were designed to lower the veils between the real world and the spirit world.

During these spooky autumn activities, Celtic men and women acknowledged the supernatural elements of life.

People in medieval Ireland, Scotland and Wales believed in spirits, faeries and other magical creatures.


At this stage, science was not evolved enough to explain certain elements of life. Therefore, any unusual occurrences tended to be perceived as the products of the spirit world.

Steeped in superstition, the medieval folk of Celtic lands practiced Samhain rituals in order to connect with these otherworldly forces. 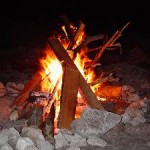 Elements of Samhain rituals also honored the harvest. For Celtic country folk, harvest time was very important, as sustenance and survival depended on the land and what it could produce.

Therefore, Samhain rituals, which had much in common with today’s Halloween rituals, were a potent and intoxicating combination of earthy and darkly spiritual elements.

Now, let’s take a look at the meaning of specific Samhain rituals practiced in Celtic lands on the night of October 31st…

Samhain Rituals and their Meanings

Bonfires were a central element of medieval Celtic Samhain rituals. In fact, bonfires figure prominently in all Druidic rites practiced during that time period.

For example, during Samhain, Scottish men would light torches within roaring bonfires and then walk around their homes and land, torches aloft, in order to gain protection during the new year.

Another Samhain ritual was leaving food at the front door of houses to reward “good” spirits; this tradition is likely the inspiration for today’s “trick or treating”. In addition, the country folk of Celtic lands would don masks and costumes to frighten off malevolent spirits.

Since dark spirits were believed to be everywhere on this night, the people of Celtic lands did all that they could be avoid being possessed by these ghosts.

On Samhain, all domestic cooking fires would be put out. Then, village elders who practiced the Druid faith would meet in sacred oak woods to light fires and perform sacrifices. Fire was viewed as purifying, cleansing, and magical.

In fact, the whole night of Samhain was perceived as magical, as it represented the change between one season and the next. According to Celtic lore, changes in seasons were special times that were impregnated with magic, supernatural power and spiritual significance.

The Jack-o-lanterns that we create today in order to adorn our front doorstops on Halloween are also a remnant of ancient Celtic rituals.

In medieval times, the Celts (in particular, the Irish) used hollowed-out turnips filled with embers to ward off dark spirits on Samhain.

As you can see, Samhain is the root of our modern-day Halloween.