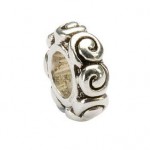 Mystical Celtic symbols appear as central motifs on some of our most intriguing Celtic jewelry designs, such as the Tara’s Diary Spiral Spacer Bead Charm shown at left.

You may associate these spiral designs with Ireland, Scotland and Wales, without really understanding what they mean and why they’ve come to represent Celtic culture.

To help you learn more about the symbolism and historical significance of these fascinating motifs, we’ve compiled a few fun facts about Celtic spirals…

What Do Celtic Spirals Mean? 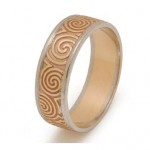 The distinctive and curving lines of Celtic spirals, such as those displayed on our beautiful Ladies Two Tone Celtic Spiral Wedding Band (shown at left) are reminiscent of spiral seashells.

Celtic spiral motifs are believed to symbolize life-force and eternity, with the space between each curve representing another milestone in life.

From birth to adulthood to death and spiritual rebirth, the journey of mind, body and spirit is traced in the gentle, pleasing lines of each Celtic spiral symbol.

During the early medieval period, Celtic spirituality was often very mystical. While Celtic spirals predate Christianity, they were also used as decorative elements after Celtic countries began to embrace the Christian faith.

During Pagan times, certain symbols were prevalent, including Celtic spirals, Trinity Knots and zoomorphic (animal) symbols. However, once Christianity became the primary religion of the Celts, the meanings of these symbols evolved to reflect Christian beliefs.

Some of the most famous examples of Celtic spirals are found at County Meath, Ireland’s Newgrange Passage Tomb (as shown below):

The spirals inscribed upon the stones at Newgrange Passage Tomb date back to the Megalithic age (3200 B.C.). The stones relics themselves are known as kerbstones. The common people called these unique mounds “fairy mounds”, in keeping with the supernatural beliefs of the ancient Celts.

Today, visitors to Newgrange Passage Tomb marvel as the quartz facade of the structure, which is surrounded by fairy mounds adorned with mystical and magical Celtic spirals.

Before the Winter Solstice, people enter a special lottery to gain admission to the tomb. Winners are lucky enough to experience the beauty of the inner tomb, which is flooded with light (from skylights) for seventeen minutes during the solstice.

It is estimated that the construction of the tomb took decades to complete. Much like the Egyptian pyramids, Newgrange Passage Tomb remains a subject of wonder and fascination, and its Celtic spirals reference thousands of years of Celtic history. 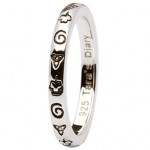 If you’re searching for a way to connect with your own Celtic heritage, you’ll love wearing our affordable, sterling silver Tara’s Diary Celtic Symbols Stacking Ring.

This unique design features lovely Celtic spirals, as well as some other important Celtic symbols (including Trinity Knots and Irish Shamrocks).

These symbols of faith, love and eternity add richness and dimension to the handcrafted design, which may be worn alone, or complemented by other stacking rings from our Tara’s Diary Collection.

Other rings from the collection feature bright enamels, pearls, gemstones, and expert engraving, so it’s possible to create a custom configuration that really expresses your personal style, as well as your Irish, Scottish or Welsh roots.

This signature piece retails for only $48.00, so it’s a perfect gift to yourself. Of course, it also makes a charming gift for any special lady in your life.