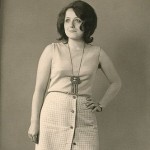 Now and then, we take a trip back in time by visiting the Ireland of yesteryear. Our Ireland in the Year 1970 post is the latest in a series of these articles. You may find the full list of “Ireland in the Year” articles HERE.

Our “Ireland in the Year” posts are inspired by an Irish documentary series, Reeling in the Years, that highlighted the big events of specific years, including noteworthy political changes and pop culture trends.

This week, we’re going to take our readers on a journey back to 1970, when the impact of the previous Flower Power generation was still very much in evidence.


During this pivotal year in Irish history, Dubliners began to dabble in a new and thriving night club scene that was more glitzy and glamorous than the typical neighborhood pub scene.

However, the pubs were likely the preferred venues for watching soccer legend Pele lead his Brazilian team to victory during the 1970 World Cup.

During this year, Irish natives watched in horror as Apollo 13’s astronauts coped with an on-board explosion that threatened their lives.

After a quarter-million-mile journey, these astronauts landed on Earth once more, safe and sound (despite reduced power and oxygen in their damaged rocket).

From a sociological standpoint, 1970 was a time of great change in Ireland, as the Catholic bishops of the Emerald Isle finally ceased their Church ban, which had prohibited congregation members from attending Trinity College in Dublin.

Trinity College, which is now the home of the priceless illuminated manuscript, the Book of Kells, was founded in 1952, and its creation was inspired by the most prestigious colleges in England, Cambridge and Oxford.

Ireland won top prize in the Eurovision Song Contest during 1970, when an Irish teenager from scenic Derry was rewarded for creating the catchy tune, “All Kinds of Everything”.

Since Ireland has long been renowned for its exquisite singers and songwriters, it was gratifying for the country to receive its first winning prize in this global competition.

On the global stage, the United States of America continued to bring their troops back from Vietnam, thereby granting their South Vietnamese allies a more important role in this ongoing conflict.

More Highlights of Ireland in 1970

Dubliners enjoyed an exciting new retail venue when the ‘Dandelion Market’ opened for business. This infamous outdoor market was an excellent place to hang out during the early 70s. Years later, Ireland’s most lauded band, U2, played at the market, thrilling fans with their signature, joyous brand of rock’n’roll.

On a much more somber note, Irish citizens took in the grim spectacle of the war for Biafra’s independence, which had dragged on for over two years. During 1970, Biafran rebels gave in to the federal army. This surrendered finished the conflict. During the long war, over a million people perished from starvation.

Music was exceptional during this year, and the top of the Irish charts features a range of deeply talented musicians, such as the Beatles, Elvis Presley, and James Taylor.

Here’s one of the hottest tunes in Ireland in 1970… 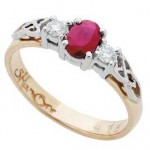 Adorned with a genuine solitaire ruby, diamond accents, and an intricate, Celtic knot work setting, this elegant and vibrant design captures the spirit of medieval Ireland to a “T”.

Available in two-toned 14k gold, as shown at left, or a monochrome, white gold finish, this lovely and romantic ring is handcrafted in Ireland for true authencitity.

Our 14k Ruby and Diamond Celtic Engagement Ring is just one superlative example of the traditional Irish quality that we offer to our valued clientele.