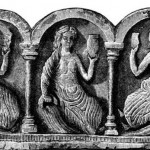 Also known as the “people of the Goddess Danu”, the Tuatha Dé Danann tribe was portrayed in Celtic mythology as one of the first groups to live in Ireland.

According to legend, this group of Gaelic inhabitants were the descendants of Nemed, who oversaw an earlier settlement in the Emerald Isle. The Tutath Dé Danann were known for their magical abilities and their belief in the occult.

The myths tell the story of a tribe who brought stormy times to Ireland through their love of the black arts. Also known as combative people, these tribesmen and women were believed to have pronounced supernatural qualities.

A Fierce and Wild Tribe…

Fierce in battle, the Tuatha Dé Danann were involved in several dramatic battles, including the First Battle of Magh Tuireadh, where they trounced the Fir Bolg tribe, who had long been settled in the west of Ireland. At the head of the Tuatha Dé Danann army, the tribe’s regent, Nuada, hollered his battle cry, but was doomed to lose his arm in the heat of combat.

In the hardscrabble culture of this tribe, the loss of an arm signified weakness, and Nuada was stripped of his royal status.

Nuada’s replacement was a cruel and bitter man, Fomorian Bres. In time, Nuada received a silver arm that functioned much like the real thing, and he regained ascendency by becoming regent once more.

According to myth, Nuada then uttered a spell that caused his silver arm to turn into flesh and bone. Unfortunately, this spell did not offer the two-time king of the Tuatha Dé Danann protection from mortality, and he fell in combat during the Second Battle of Magh Tuireadh.

At this point, the tribe entered into a war with a new group of invaders, known as the Milesians, who hailed from what are now Galicia and Portugal. The myths tell of a trio of Milesian goddesses who were named Erin, Banbu and Fodla. These goddesses were the inspiration for Ireland’s poetic nicknames.

Eventually, a truce was formed between the Tuatha Dé Danann and the Milesians. However, this sense of temporary and tentative peace was only an illusion, as the Milesians plotted all the while (with their magic) to bring down the other tribe.

The spells of the Tuatha Dé Danann harnessed all of the dark power of the occult to conjure up a vicious storm that was meant to repel their enemies and force them out of Ireland.

In retaliation, Amergin, a Milesian who crafted poetry, stilled the sea’s churning waves with his beautiful words. Then, Amergin had his ultimate revenge upon his enemies.

Asked to divvy up the land between the two tribes, Amergin came up with a clever plan that gave the upper portion (above the ground) of terrain to the Milesians, while the Tuatha Dé Danaan were relegated to the underworld.

In this act of revenge, he destroyed the opposing tribe, who were led to their doom by Mananna mac Lir, a sea deity who also figures prominently in Irish mythology.

Embrace the Spirit of Celtic Mythology with Traditional Celtic Jewelry 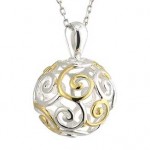 Celebrate the beauty of Irish culture and mythology by treating yourself to our exquisite Silver and Gold Plating Spiral Sphere Pendant. This elegant and original design features delicate Celtic spirals, which are molded into a latticework sphere shape.

Each Celtic spiral represents life-force and eternity. These ancient symbols have appeared on Celtic art treasures, burial mounds and runes since the days before Christianity, so they remain one of the most timeless symbols of the Emerald Isle and its people.

Our handcrafted sterling silver pendant is adorned with gold-plating for an exciting, two-toned effect. This pendant is very affordable and so versatile. Since it is crafted of silver and gold, it will always match any other jewelry that you wear.