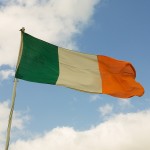 Now and then, we like to take a trip back in time by examining Irish culture and history during different years. This time, we’d like to take a look at Ireland in 2004.

Time seems to pass so quickly, and, although the Irish culture is always distinct and unique, even the passage of eight years tends to underscore pronounced changes in tastes, styles, and other elements of culture, such as politics and popular music.

This post is inspired by the Irish documentary program, Reeling in the Years, which presents the world of Ireland during different eras. This popular TV show interspersed photographs and video footage of topical Irish news events for a specific year with snippets of hit songs and easy-to-read captions.

Smoking is Banned in Pubs 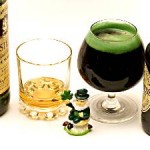 It was the end of an era as Ireland’s freewheeling pubgoers were banned from smoking inside of these popular drinking establishments.

For decades, Emerald Isle residents who enjoyed cigarettes were allowed to light up while imbibing pints of Guinness beer or other typical pub beverages. However, concerns about secondhand smoking prompted the new no-smoking ban’s passage.

Naturally, pub owners were less than enamored of the ban, which would force their smoking clients outdoors (they might not come back and spend more money!) to get their nicotine fixes.

However, Irish non-smokers were clearly overjoyed that they could now visit the pubs without risking their health. Ireland was the first country to ban cigarettes from pubs. 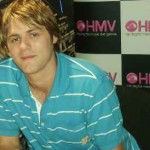 During a press conference, Westlife member Brian McFadden left the band’s most loyal fans in anguish by announcing his departure from the group. McFadden wished to pursue a solo career and enjoy more time with his family.

This announcement confirmed long-time rumors of trouble within Westlife’s ranks, and came shortly after the release of their Greatest Hits album.

Westlife were one of Ireland’s most prominent musical acts, and they were part of pop manager Simon Cowell’s stable of artists.

After McFadden’s departure, the band forged onward, grabbing attention with hit singles, such as “You Raise Me Up” and “Amazing”.

The Irish Pay Close Attention to the Bush Vs. Kerry Presidential Election

The war in Iraq was an important topic as USA Democratic Party nominee John Kerry battled George W. Bush for the American presidency. On Tuesday, November 2, 2004, the Republican Party took the ultimate prize, and liberals in Ireland (and all around the world) were aghast at the prospect of four more years of Repubilcan rule under Bush’s controversial leadership.

Many people felt that Bush had already “stolen” the election from Al Gore back in 2000.
Reeling in the Years…


Irish Workers Suffer After 6,000 Jobs are Outsourced to Morocco

For years, Fruit of the Loom (an American clothing company that specializes in producing cotton underwear) employed thousands of Irish workers in its two Emerald Isle factories. In 2004, these workers lost their jobs as both factories were shut down. All work was then transferred to factories in Morocco, where cheaper labor was prevalent. This unfortunate event echoed a trend that was happening all over the world.

A new and ultra-modern light rail (tram) system was launched in Dublin in 2004, offering quick and convenient transport within the Emerald Isle. There had been no trams in Ireland for 55 years. By 2005, over 50 million riders has enjoyed the system. Tragedy struck in 2011 as a Polish national was hit by a LUAS train and killed.

Celebrate the Ireland of Today with Modern Irish Jewelry 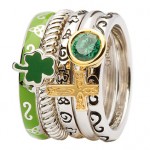 At Irish Celtic Jewels, we specialize in providing our valued clientele with traditional Gaelic designs that also offer a touch of trendy, modern style. Our selection of Tara’s Diary Stack Rings are a perfect blend of ancient Irish symbols (such as Shamrocks and Trinity Knots) and current design elements.

Why not honor your own Irish heritage by choosing a few coordinating stacking rings from our collection? These stunning pieces may be worn alone, or grouped for a rich and dimensional effect.

Our rings come in a range of colors, and they are accented by bright enamel, engraved symbols, gemstones, pearls, and gold embellishments.