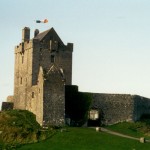 Located in County Galway, Ireland, Dunguaire Castle is a picturesque remnant of the sixteenth century.

Today, this unique edifice, which features a high tower and a stone wall, is one of the county’s most popular tourist attractions.

According to local lore, the castle even brings good fortune to those who spend time at the front gate.

Therefore, tourists and townspeople alike often choose to ask questions about their hopes, wishes and dreams while they are near the gate, in the hopes that their desires will be fulfilled through the castle’s “magic”.

This charming tradition has its roots in the generous spirit of its former occupant, who was a Lord and, by all reports, an exceptionally kind and giving man.


If you’re in County Galway and you plan to visit Dunguaire Castle, be sure to have a question in mind as you approach the front gate.

Constructed under the supervision of the Hynes family in the year 1520, this stately fortress is rumored to be the former residence of an Irish king. Known as the King of Connacht, this regent was one of the founding members of the Hynes family.

Like many other Irish castles, this home changed hands in more modern times.

By the 17th century, Dunguiaure Castle belonged to Oliver Martin, and remained the property of his descendents until the 20th century, when it was purchased by a renowned wordsmith and doctor, Oliver St. John Gogarty.

Fascinatingly, Gogarty’s new home became a hub for some of the greatest modern poets, and its owner took great care to restore the castle and grounds during this period.

Esteemed literary legends, such as the poet, William Butler Yeats, spent time within the walls of Dunguaire Castle, as did his frequent companion, Lady Gregory (who is the subject of several of his poems).

The members of this exclusive literary circle played pivotal roles in the poetry movement known as the Celtic Revival, and the fact that such famous poets (and their patrons and muses) gathered at the Castle makes it even more appealing to many visitors.

Sold again in 1954, the restorations that were undertaken by the doctor were then finished by the castle’s new owner, Christobel Lady Ampthill. In time, the castle’s deed was transferred again, to a development company that oversees many popular heritage sites in the Emerald Isle.

Now open to the general public in the warm-weather months, Dunguaire Castle is home to a charming medieval banquet with all of the bells and whistles. During the revelries of the banquets, Irish verse and Irish music are always on the menu.

Honor the Legacy of Ireland with our Stunning Warrior Shield Earrings

Honor the strength and bravery of medieval Irish warriors and their High Kings by choosing our stunning Silver and 18k plating Celtic Warrior Earrings.

These signature earrings feature the most intricate Celtic knot work patterns, along with shining circles of gorgeous yellow gold.

Designed to add polish and style to any outfit, these affordable, handmade earrings are available for just $99.00.

The earrings also come in a larger, bolder size, and these bigger pieces are priced attractively at $117.00.

Perfect as a gift for any strong, inspirational lady, our warrior shield earrings are inspired by the beauty of the Ardagh Chalice, an Irish war treasure that features the same intricate engraving and circular shield motifs.