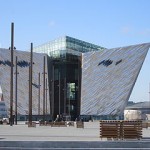 To honor the 100th anniversary of the sinking of the Titanic, which happened on April 15th, 1912, there’s no better place to be than the Titanic Belfast interactive museum in Belfast, Ireland.

This dazzling exhibit is currently one of the world’s most exciting and desirable tourist attractions.

The museum opened to great acclaim on March 31, 2012, and it continues to educate visitors by offering them an in-depth look at the Titanic’s history, from the conception of the ship’s design to the aftermath of its tragic sinking.

The museum features a series of dark rides, to-scale reproductions, and interactive features that bring the legends associated with this tragic luxury vessel to life.

If you’re fascinated by Titanic lore, visiting the Titanic Belfast will be the perfect way to embrace the entire Titanic experience…

The Sinking of the Titanic

The RMS Titanic began to sink on the evening of April 14th, 1912, and descended under the Atlantic waves on the fifteenth of April, 2012.

At this point, the ship had only been at sea for four days.

The Titanic was travelling from Southhampton to New York City, and it was renowned as the biggest passenger ship in the world during that time period.

Over two thousand souls were on board when the ship hit an iceberg. It took less than three hours for the vessel to go down…

1517 people passed away when the ship sank. During its voyage, the ship’s crew had been repeatedly cautioned about dangeous sea ice.

However, the ship was going full speed when it struck an iceberg. Its starboard side warped and then broke open, exposing several of its compartments to the frigid ocean waters.

To deal with the crisis, the Titanic’s crew loaded surviving passengers into lifeboats, while also using rocket flares and radio communications to call for help.

The evacuation of the Titanic was a botched enterprise, as there were simply not enough lifeboats for the number of passengers on board.

In addition, lifeboats went out with too few people on them, depriving others of the chance to survive the ship’s sinking.

The temperatures of the icy waters killed many people who were trapped in the sea. In time, a rescue ship arrived and took away those who were still alive.

The Titanic and Belfast 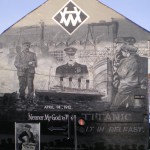 This ship has a Belfast connection, which is why the interactive museum was built in this Northern Ireland city.

The vessel was built by Harland and Wolff at Queen’s Island in Belfast for the Oceanic Steam Navigation Company (White Star Liner).

Today, signs of the ship’s legacy appear all over Belfast. The mural pictured at left is a Belfast attraction that carries the slogan, Nearer my God to thee…”

Walking tours of Titanic-related landmarks are also quite popular with visitors to Belfast. Storytellers regale tourists with tales of the ship and its passengers, while indicating important locations, such as the city’s Titanic Quarter. 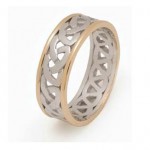 Our Ladies Two Tone Celtic Wedding Band is a beautiful expression of traditional Irish design. This signature piece is crafted from your choice of silver and yellow gold, or white and yellow gold.

The designs on this ring are beautiful, ornate, and handcrafted. The latticework motifs are symbolic of eternity, and they mimic the beauty of ancient Celtic interlace.

If you want a wedding band with true Gaelic style, this affordable piece will give you pleasure for a lifetime.