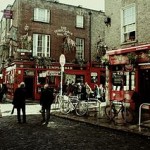 Known as Dublin’s premier cultural quarter, Temple Bar is situated near the picturesque River Liffey, and it is one of this vibrant Irish city’s most historic and charming regions.

Famous for its lively nightspots and its chic boutique hotels (such as the Clarence Hotel, which is owned by “half” of U2 – Bono and the Edge), this area is popular with tourists and Dublin natives alike.

Temple Bar is also the home of many important Emerald Isle institutions, such as the Irish Film Institute and the Gaiety School of Acting.

Whether you’re planning a trip to Ireland or you just love reading about Dublin and everything that it has to offer, you’ll likely enjoy this quick guide to the history of Temple Bar and its most interesting things to see and do.

This region got its name from the Temple family, who bought the area’s land in the 17th century.

During this era, Sir William Temple, scion of this wealthy family (he worked as a provost at Trinity College), had a personal walkway and garden that was also used by the public as a picturesque pathway.

In 17th century Ireland, these pathways were known as “barrs”or “bars”, and so the garden path soon earned the nickname of “Temple Bar”.

The Temple Bar area later gained prominence as an economic hub, due to the construction of the Customs House in that area. Today, the posh Clarence Hotel is built upon the old Customs House land.

The Customs House was used to check every import was processed into Ireland.

Since many employment opportunities were created due to the Customs House and related businesses, the region was also prime real estate for plenty of entertainment options, including houses of ill repute, saloons, and theaters.

After Customs House services were moved to another location, the Temple Bar area suffered a downturn that lasted for a very long time.

However, a transport company initiated a revival of the area during the 1980’s, by purchasing many parcels of land and then leasing these inexpensive spaces to local performers, artists, and other creative folk.

Such began the renaissance of Temple Bar, which is still going strong today…

Things to See and Do 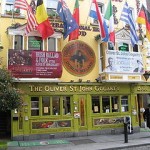 This region has a namesake bar (Temple Bar) that is also called Flanagan’s, and it is definitely on most tourist’s lists of things to do in this lively Dublin neighborhood.

This pub and restaurant establishment features a vast selection of Irish ales and whiskeys, as well as every other drink that you might imagine.

Tourists often amass to enjoy the live busking that takes place outside of Flanagan’s. For a true Irish pub experience that is steeped in Dublin history, this location is second to none.

Another fun pub experience in the Temple Bar area is the Oliver St. John Gogartys Pub (as shown at left); this Dublin favorite serves regional pub fare, as well as the requisite pints of Guinness.

Every night of the week, you’ll be able to hear wonderful, traditional Irish music at this cheery Temple Bar drinking house.

These theatre opened in 1871, and it is still Dublin’s most revered venue for theatrical entertainment. Visitors to the theatre may enjoy plays, live musical performances, opera and drama. No visit to Dublin’s Temple Bar area is complete without a night out at the Gaiety Theatre. 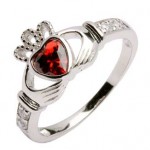 If you are proud of your Irish blood, why not treat yourself to a traditional Irish Claddagh ring that is a perfect expression of your Gaelic roots?

We are proud to offer a stunning Silver Claddagh Birthstone Ring that may be customized for your own month of birth.

This affordable design is handmade in Ireland, and it only looks expensive.

Perfect as a treat to yourself, or as a lovely gift for a special lady, our ring symbolizes everlasting love and loyalty…