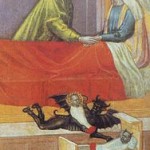 Do you believe in fairies? If you do, you have much in common with the Irish folk of the Middle Ages.

Back in medieval times, many Gaelic men, women and children believed that magical creatures inhabited the forests around their villages, lurking in the hollows and lying in wait.

Sometimes, in the dead of night, these beings would slink into human homes and then wreak havoc.

While some fairies were perceived as crafty, but relatively harmless (such as the famous leprechaun), others were considered to be quite malevolent.

In particular, Irish Changelings, which were believed to be the children of evil fairies, trolls or elves, were the subject of much fear and fascination.

According to legend, the magical parents of these newborn Changelings would steal human babies from their cribs, and then leave their own Changeling children behind.

Of course, there were also grim questions as to what the fairies, trolls and elves of Ireland did with the innocent human children that they kidnapped…

According to legend, the magical beings of the Emerald Isle are often disappointed by their own babies, as many of these infants are not beautiful or lovable.

Since trolls, elves and fairies may not be stunners themselves, it stands to reason that their babies will also lack a certain charm…

Therefore, the cruel and capricious parents of ugly or imperfect “fairy babies” long for the beauty and perfection of human babies, with their smooth skin, rosy cheeks, and bright eyes.

To rid themselves of their own offspring, who don’t do them credit, they decide to steal human babies and leave their own fairy infants behind.

This Gaelic myth played into a variety of religious and moral superstitions; for example, it was believed that human babies that were not baptized were at greater risk of being “changed”.

As well, babies who were fussed over and adored were thought to be ripe for the picking.

The lesson seemed to be that pious parents who honored God through religious rituals, and also restrained their natural high regard for their infant through modest displays of affection, would be more likely to keep their baby, and less likely to find a mean-spirited, grimacing baby troll, elf or fairy in its crib!

As the legend goes, fairy babies, who were unlucky enough to be born with sallow skin, gaunt cheeks, thin, wrinkled lips, and beady dark eyes, were also noisy little creatures.

These changelings, perhaps disturbed by their sad lot in life, tended to screech, yelp and whine in their cribs, causing great distress to their new human “parents”.

Little pity was felt for these infant fairy folk, who were cruelly abandoned to a world that wanted nothing of them.

However, these dark-eyed children, who were believed to have frail bones and gnarled little fingers, were often musical prodigies, who played the fiddle or pipes with supernatural ease and ability.

Crosses were often raised above cribs to keep evil spirits away from newborn babies of the human variety. 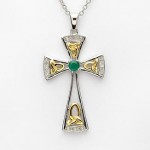 To celebrate your Gaelic heritage and your faith, why not treat yourself to this traditional pendant this season?

Our pendant makes for a lovely Easter gift for any special lady, and it comes with a matching silver chain.