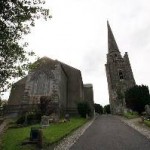 Located just a half hour’s drive away from Dublin, Ireland, Kells is a small town with a rich historical legacy.

In the Early Medieval Period, this County Meath enclave was the preferred royal residence of the Irish High Kings.

This town was also the location of the Battle of Kells, where Edward Bruce (younger brother of King Robert I of Scotland) and his army fought against Roger de Mortimer (who was a Lord Lieutenant of Ireland) and his forces.

Usually, such medieval battles were fought to secure cattle and other “riches”.

This epic battle featured 6000 combatants, and Mortimer’s army was beaten by the Scottish regiment.

Today, Kells is a bustling bedroom community for those who commute to Dublin.

Best known as the home of the Abbey of Kells, this picturesque town is resplendent with ancient round towers, stately churches, and crumbling monastic ruins.

Kells is also the home of the Book of Kells, an Irish illuminated manuscript which depicts the four books of the Gospel with stunning drawings and symbols that are adorned with rich paints and drops of shining gold.

The Book of Kells was produced by Irish monks in the Abbey of Kells. One of Ireland’s most famous saints, Columba, lived at this Abbey during the ninth century…

Things to See and Do in Kells, Ireland 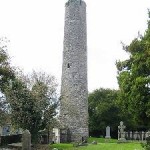 Experience medieval history and Celtic spirituality by visiting the Abbey of Kells and viewing its distinctive round tower.

This ninth century monastery was once the resting place of the Book of Kells; now, this illustrious manuscript is housed at Trinity College, Dublin (in the Long Library).

While the origins of the Book of Kells are somewhat mysterious, it is believed to have been created at the Abbey.

Saint Columba was the founder of the Abbey of Kells, and this spiritual sanctuary was built on the remains of an Irish hill fort.

It is believed that the Abbey was constructed as a safe place for monks to practice their faith.

Many of the Abbey’s medieval residents were monks who had experienced terrifying Viking raids at other Irish monasteries.

However, the Vikings eventually raided this Abbey as well; relics were stolen and buildings were destroyed with the Vikings’ characteristic savagery.

Irish monks somehow protected the precious Book of Kells from these assaults, until it disappeared in 1006.

Often, Irish round towers, such as the tower found at the Abbey, were used to stash important relics and papers.

In fact, Irish monks often died while trying to hide precious items in the towers. Monks would be burned alive as the Vikings set fire to these tall structures.

Some months later, the Book of Kells was returned, minus its front cover. The Abbey of Kells stayed open until the 12th century.

Today, visitors to the Abbey marvel at the beauty of early medieval architecture, and they probably imagine the lives of the monks and saints who once wandered the grounds and worked and prayed in the buildings.

If you’re in Kells, this ancient Christian monastery and its majestic round tower are definitely a must-see…

No visit to Kells is complete without a visit to the town’s Heritage Centre. This educational venue features a series of exciting exhibitions, an onsite cafe, and a charming gift shop.

A clever reproduction of the Book of Kells is found among the exhibits; this facsimile of one of Ireland’s greatest art treasures was a present from Trinity College in Dublin.

As you can see, this historic town is a fascinating place that really evokes thousands of years of Gaelic history and culture. Visiting Kells, Ireland is a wonderful way to trace your own Irish roots and to understand more about medieval life in Ireland…

Celebrate Your Faith with a Traditional Celtic Cross Pendant 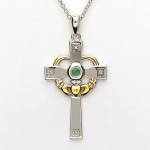 Capture the essence of Celtic faith by treating yourself to our handmade Diamond & Emerald Claddagh and Celtic Cross.

Adorned with precious gemstones, this traditional Irish design is made more romantic by the addition of Claddagh symbols.