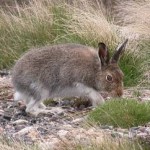 The adorable Irish hare has been in the news lately, because this breed (known by the scientific name, Lepus timidus) is sadly facing extinction.

Ireland is perhaps best known for its wolfhounds, setters, and shy, beautiful red deer (which inhabit the country’s lush woodlands); however, the Irish Hare has always figured prominently in the folklore and culture of the Emerald Isle.

These hares range in color from pure white to grayish-brown.

Fun Facts About the Irish Hare

In Irish mythology, this hare is believed to represent Eostre, the Goddess of the Moon…

This hare is immortalized in the traditional folk ballad, the Creggan White Hare; in the song, the rabbit is clever enough to elude capture by even the most skilled Irish hunters.

Agile and fast, these intelligent animals are rare sightings in the Emerald Isle; easily startled and stressed, a typical Irish Hare will avoid contact with human beings.

The white Irish Hare is much rarer than its brown counterparts, and it has been the subject of particular fascination throughout the centuries; some medieval Irish folk believed that this snow-white hare had magical powers and properties…

In the lowland of Creggan, there lives a white hare

As swift as the swallow that flies through that air.

You may tramp the world over but none can compare

With the pride of low Creggan, the bonnie white hare.

Today, many tourists enjoy exploring the town’s An Creagán Visitor’s Center, which honours this famous animal and its cultural legacy.

Many residents of Creggan work hard to protect the region’s Irish Hares and to conserve their natural habitats.

A stylized silhouette of this gentle hare also appears on Irish three-pence coins.

Also known as Mountain Hares, Irish Hares are bigger than rabbits, and they are shy creatures who tend to live solitary lives. Habitats include grassy fields and woodlands, along with mountainous regions.

These creatures will lie low during the day, usually hidden among tall grasses; Irish hares don’t live in burrows, so they need to hide themselves from predators during the daytime hours.

During mating times, male Irish Hares will prance and jump to attract the interest of females; the female hares are quite silent and passive as they observe these sorts of performances.

To see the amazing grace and speed of a jumping, frolicking Irish Hare, check out the YouTube video posted below; it features a family pet named Buster, who happens to be blind.

While most Irish Hares are frightened of people, Buster has learned to trust his adoring owners… 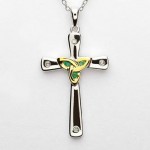 Any woman who is proud of her Irish heritage, and her faith, will enjoy wearing a traditional Emerald and Diamond Silver Trinity Knot Cross Pendant.

Adorned with genuine diamonds and emeralds, this exquisite pendant is crafted from sterling silver and gleaming rhodium; each Trinity Knot is gold-plated for beautiful contrast.