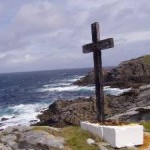 A premier County Donegal tourist attraction, Malin Head is a rugged stretch of coastline that holds its place as one of the Emerald Isle’s northernmost points.

Visitors to this wild and unspoiled Irish land often come to Malin Head to enjoy outdoor pursuits, such as fishing, hiking, swimming and golf. Many tourists also come to learn more about this area’s significance as a WWII battleground…

Located near Trawbreaga Bay and Tory Island, Malin Head has a rich and dramatic history; it is currently the final resting place of many shipwrecked vessels (such as the Carthiginian steamship, which was sunk by a Nazi submarine, and the Castle Eden steamship, which met the same tragic fate).

The rough, blue-gray waters of Malin Head also hide many other sunken ships, including German U-boats and Allied trawlers…today, many sport divers visit the region to explore the frigid waters and to marvel at their myriad secrets…

Many of the ships that lie on the seabed of Malin Head were downed during the WWII Battle of the Atlantic; this Irish outpost was also used as a strategic navigational marker during that war.

Recently, the bestselling novel, The Pilot’s Wife (by Anita Shreve), featured Malin Head in one of its most pivotal and poignant scenes…

If you’re curious about this important area of Ireland, you’ll enjoy our guide to some interesting, educational, and unforgettable things to see and do in Malin Head…

Things to See and Do in Malin Head

Fort Dunree (Fort of the Heather)

During the Second World War, this stone building was occupied by Irish forces, who used the Buncrana, Inishowen (situated very close to Malin Head) fort as their base; these soldiers were in place to ensure that Irish neutrality was respected during this global conflict.

Ireland’s issues with the Crown spurred their position as a neutral country; however, many Irish men and women did make significant contributions to the war effort, despite the official stance of neutrality.

Today, visitors take walks around the picturesque fort and then enjoy tours of the Fort Dunree Military Museum, which is the home of several fascinating underground bunkers, as well as a stunning collection of military paraphernalia.

The beauty of the old fort and its interactive museum (which offers films and other educational exhibits) make it a must-see for anyone travelling to Malin Head.

Named for a queen from Irish mythology, Banba’s Crown is Malin Head’s northernmost point, and it was once marked by a stone tower that was constructed as a Martello lookout during Napoleon’s time; in the early nineteenth century, the British rebuilt the tower for use as a weather station.

The word “EIRE”, created from scads of white stones, is carefully arranged on the green hills of Bamba’s Crown; this marker was used to alert World War 2 bomber crews.

From the tower, visitors enjoy sweeping views of nearby Inistrahull Island and its distinctive, flashing lighthouse.

When the sky is bright and free of cloud cover, tourists who visit Banba’s Crown may catch a glimpse of the Scottish Islands (Jura and Islay); many painters, poets and musicians have found inspiration at this scenic place…

This gorgeous beach features a view of Tory Island, and it is also the home of the Twilight, a ship that went down in 1889, while on a journey from Newfoundland, Canada to Derry, Ireland.


Today, this body of water is used for kite fishing, sailing, and other nautical pursuits; rare birds, such as the corncrake, have also been sighted (and heard!) in this scenic area… 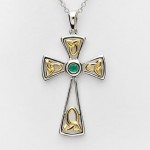 Our Silver Emerald Trinity Knot Cross Pendant is a perfect expression of faith, and a delightful way to display your Irish roots.

In Irish culture, the Trinity Knot symbolizes Father, Son and Holy Spirit; this ancient symbol has appeared on Irish art treasures since the early medieval period.

Show your spirituality with this meaningful, handcrafted pendant…each piece is made in Ireland and stamped at Dublin Castle for true Gaelic authenticity…