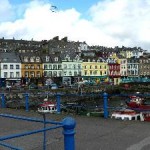 Located in County Cork, Ireland, the scenic seaside town of Cobh (pronounced, “cove”) is well-known for its charming, colorful row-houses, as well as its famous statue of Irish immigrant Annie Moore (and her two brothers).

Ms. Moore was the first person to be processed at Ellis Island, and she arrived there after an arduous journey on the S.S. Nevada. Moore boarded this ship at Cobh (which was then named Queenstown), and she disembarked in America eleven days later.

Today, visitors to Cobh admire an artful stone homage to Moore and her brothers – their expressions seem to illustrate a mixture of trepidation, anticipation, and hope…


During the Great Famine, many Irish men, women and children departed from this coastal hub en route to historic Ellis Island, USA…one can only imagine the powerful emotions that they experienced as they prepared to face the unknown in a new continent…

This Irish seaport is also infamous as the last port of call of the H.M.S. Titanic, and it figures prominently in the history of another doomed vessel – the Lusitania…

The rich legacy of Cobh makes it a fascinating and meaningful tourist destination for visitors from all over the globe; here are some interesting things to see and do in this Emerald Isle locale…

Things to See and Do in Cobh, Ireland 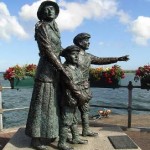 Cobh Heritage Centre is a great place to begin exploring the history of this scenic Irish town.

In particular, this heritage centre focuses on the plight of Irish immigrants, who travelled to Canada and America to avoid the hardships of poverty, failed crops, and contagions…

From 1848 to the early 1950’s, more than two million Irish people left their homelands via Cobh’s harbour – all in all, six million Emerald Isle natives chose to leave their birthplace in order to build a better life in North America.

The sacrifices and achievements of these Irish people are documented in a series of poignant and educational exhibits.

This heritage center is the home of the Annie Moore statue shown at left – just outside the centre’s main entrance, Annie and her brothers are captured at a pivotal moment in Irish history.

No trip to Cobh is complete without a visit to this museum, which also features plenty of important information about Cobh’s maritime history (including facts about Cobh’s connection to the Titanic and the Lusitania). 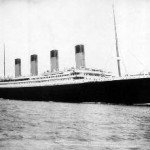 This popular walking tour of Cobh allows tourists to experience history in a more immediate way.

The Titanic Trail was devised by a renowned local historian, Michael Martin (PhD), who linked the vistas and locales of Cobh with the legendary vessel’s history…

For those who are intrigued by the Titanic’s tragic end and the steps leading up to its fateful sinking, the Titanic Trail walking tour provides a diverting way to learn more about the ship’s many connections to Ireland.

This ancient burial ground is the final resting place for 193 of the Lusitania’s crew members – this infamous ship was sunk by a German torpedo in spring of 1915. 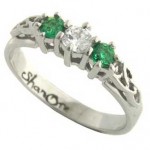 Designed to be worn as an engagement ring or an anniversary ring, this special piece is available in a 14k white gold finish or a two-toned yellow-and-white gold finish.

As this breathtaking design honors the spiritual traditions of the Emerald Isle, it is a wonderful way to display your Irish heritage and your Christian faith…in fact, the religious symbols found on his glittering ring date back to the Middle Ages…

Every piece we offer is handmade in the Emerald Isle for true authenticity, and then stamped at the Assay Office of historic Dublin Castle.