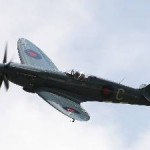 Like the Swiss, the Emerald Isle opted for neutrality during the Second World War.

Due to tensions with England, the Irish were not aligned with the British Crown, and this was one major reason why Ireland chose a neutral position in this escalating conflict.

In fact, a trade war between the British and Ireland began in the late 1930’s, adding a layer of hostility to an already tense relationship.

However, just as the Irish opposed England, they were likewise opposed to Germany and Adolf Hitler, and so their position of neutrality was a tenuous, and sometimes deceptive, state of affairs…

Indeed, much was going on (both above and below the surface) that belied the official state of Irish neutrality in World War II…

While certain members of the Irish Republican Army chose to forge a relationship with the Nazi party (mostly for the sake of securing weapons for their own purposes), the common people of Ireland soon realized the danger that Hitler and his forces represented.

Since Irishmen were allowed to fight for England (as part of the Dominion) if they so chose, many Emerald Isle natives decided to overlook their significant issues with the British Crown; in fact, almost forty thousand Irish fought the Axis in WWII…

However, Ireland’s government and people did largely support the continued state of official neutrality, and another key reason for this was Ireland’s small size; in the eyes of the Irish people and their leaders, Eire was simply too tiny, vulnerable and isolated to become involved in a conflict against bigger and stronger enemies.

Despite the official position of neutrality, the Irish who chose to fight on England’s side did so with extraordinary bravery. Irish women also entered the war effort, toiling as nurses and in other capacities.

In fact, one Irish nurse, Mary Fleming, saved 17 patients from certain death when London’s Grove Park Hospital (where she worked) was bombed during the Blitz.

This brave lady, who hailed from Tipperary, Ireland, climbed through broken windows to find her way to the ill and infirm, whom she then led out of the hospital. Moments after her selfless act, the relentless bombing caused the hospital’s pipes to burst, and these pipes released deadly streams of scalding-hot water.

Without her quick thinking and her courageous devotion to her patients, all seventeen people would surely have died. Mary Fleming was awarded a George Medal for her heroism.

A native of Keadue in Ireland’s County Cavan, Marcus Ervine-Andrews went on to become a captain in the British Army in World War II. His bravery is defending the French Verne Canal during the Dunkirk Evacuation won him a Victoria Cross (the highest honor possible).

On the morning of his daring deeds, Ervine-Andrews and the company he led were in desperate straits; the Germans who fought against them in France were many in number, and the Nazis attacked at sunrise with terrible fierceness.

Thinking fast, Ervine-Andrews hurried to a barn, clambered onto its roof, and then used a rifle to kill eleven Nazis; at this point, he switched to a Bren gun and continued to shoot the enemy until the barn he stood upon finally caught fire.

After the fire began, he brought his injured company to safety, leading a trek that wound through deep, cold waters. All eight remaining members of his company survived by making their way to the beach, where a Royal Navy vessel waited…