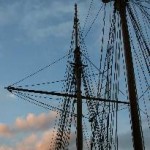 Grace O’Malley was a feisty – and sometimes lawless – Irishwoman…she was notoriously rebellious, passionate, and stubborn.

Her life was an unusual one, as she always refused to be held back by the strict gender roles of the sixteenth century

Instead, this fearless Irish queen and chieftain took to the high seas and became a pirate – and the stuff of Irish legends.

If you’re interested in Irish history, you’ll enjoy learning more about one of Ireland’s most famous women…

The Life and Times of Grace O’Malley… 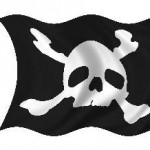 Grace O’Malley was born in 1530 (to a seafaring family in County Mayo, Ireland), and her girlhood was spent dreaming of adventures on the high seas; however, since she was female, she was constantly discouraged from her ambitions.

In frustration, young Grace chopped off most of her hair to resemble a boy and to impress her father as proper “sailor” material; this rash act was typical of the headstrong girl, and so her family only laughed, and then called her Grainne Mhaol (Bald Grace) as a joke…

However, they underestimated the grit of this girl, who would indeed realize her dreams of seafaring with her father…and sooner than anyone could have imagined…

Through sheer determination, young Grace, who was a highborn member of the wealthy O’Malley family, convinced her father (sea captain Owen O’Malley) to let her accompany him on his ship as he undertook trading missions in exotic lands, such as Spain.

Grace quickly proved herself a worthy member of the crew (or so the story goes) by attacking a man who was fighting with her father on the ship’s deck.

According to legend, the young girl climbed some rigging and then jumped onto her father’s foe, striking him from behind; she hit him hard with her full weight, and thus gave her father the advantage in battle.

Grace’s taste for action and combat was a harbinger of future exploits on the high seas; she later became a bona fide pirate who expanded her own fleet of vessels through her crimes.

The power and wealth of this reckless woman increased as her deeds of derring-do grew more and more audacious.

In her mid-teens, Grace made a strategic alliance with Donal O’Flaherty, the son of an Irish chieftain; Donal was in fact in the direct line of succession to become the next chieftain.

Grace married Donal and found herself quite at ease with her new family’s lifestyle and aims; during this period, the teenage girl became a more seasoned sailor, as her husband’s family were also seafaring people.

Her skill at trading and managing ships was confirmed as her in-laws gave her power over their own fleet – suffice it to say, it was rare for women to hold this sort of power during this era. Grace also found time to bear two boys and a girl.

The Sea Queen of Ireland earned respect through her peerless decision-making and her sailing prowess; however, she was doomed to lose her husband after almost twenty years of marriage; his fearsome temper led him into trouble, and he was killed by an enemy…

After the first marriage ended with the death of her husband Donal, Grace was spurned by the O’Flaherty family, who should have awarded her a portion of her late spouse’s estate.

This offense led to Grace’s break with this powerful family; not given to brooding or inaction, she forged a new path, heading out to sea with a group of loyal sailors, and making her own fortune.

In time, she went back to her people, the O’Malleys, and became their rightful chieftain when her father passed away.

Grace married Richard Burke to secure her dominance over the Western seas of Ireland; this new union was as strategic as the first had been. However, Grace was no longer subject to orders from her own O’Malley family, or the O’Flaherty clan.

This time, she made her own alliance according to her own desires and ambitions. According to legend, she offered to let Burke out of the marriage some months after they wed, since her goals were realized; however, these two had grown closer, and he held on to his wife, staying with her for many years. They had one child together.

All dramatic stories have dramatic endings, and the tale of Grace O’Malley is no exception. The tensions between Ireland and the British Crown soon caused strife for the Pirate Queen, who fought the English with her usual fierceness.

In time, Grace’s loved ones were captured by the Crown, and she was forced into a unique position – compromise. She had no choice but to ask the reigning queen, Elizabeth, for mercy and the release of her family members. The Queen was helpful and a temporary peace was forged.

Later, Grace’s own life lay in the balance as she was taken by a prominent Englishmen, Richard Bingham, who arrested her and deemed her a rebel and a criminal against England; she was sentenced to be hanged.

Steadfast and stoic, she prepared to die as she had lived – with courage.

At the last moment, she was freed in an exchange that left her son-in-law a prisoner in her stead; however, she was stripped of her wealth and power as punishment for her myriad rebellions against the English.

Poor and plagued by Bingham’s constant scrutiny, she begged the Queen for assistance, and, eventually, the Regent came to her aid. Some believe that Grace’s charm, humor and total lack of obsequiousness saved her from the scaffold. 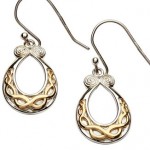 Channel the feisty spirit of your Irish ancestors by wearing bold drop earrings that add a little romance and style to your jewelry wardrobe.

Crafted from sterling silver and rhodium and yellow gold plating, these affordable earrings are painstaking crafted entirely by hand, right in the Emerald Isle..