Home > Blog > Celtic Jewelry Info > Links to the Past 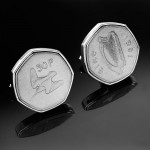 In 1926 WB Yeats was the chairman of the first Irish coin committee. Tasked with running a competition to choose symbols of Irish culture and society, the images were of an agricultural nature, featuring the Irish hare, wolfhound, bull, hen and the Irish salmon.

The salmon was taken from celtic methology and stood as the Salmon of wisdom and knowledge from the takes of Cu Culainn. The first Irish punt coins were made in 1928, such as the Irish threepence. The coins were .75 silver and have the words ‘Saor Stat Eireann’ on the coins. The threepence, sixpence, shilling ran until late 1960’s and were replaced in the early 1970’s with the new decilimisation currencies which features more celtic designs in the 1/2p and 1p.


Over the past few years Maura Reynolds has been making cufflinks out of old Irish coins. The coins are washed and hand polished bring them back to the former glory and combining retro images from Ireland into a modern and fashionable context. Last year she made a set for Bill Clinton using a 1946 Irish Sixpence which was the year he was born. Since then customers have been asking her for coins to be made into cufflinks from specific years. Taking on board this feedback, Maura spent months collecting coins from every year they were made, and has now launched a new cufflinks from 1928 to 2002.

Speaking about the cufflinks Maura said, ‘ we tried to get cufflinks from each year, which was more difficult for some years such as 1983 as the only Irish coin made that year was the 50p coin with was a seven sided coin. But we worked on getting a seven sided cufflink made, so we can now actually offer them sale. We call them funky 50p cufflinks due to their large size’

The cufflinks are available to purchase at www.birthdaycufflinks.ie and start from €39 to €125. 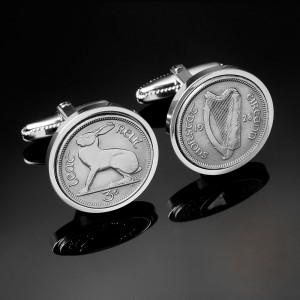 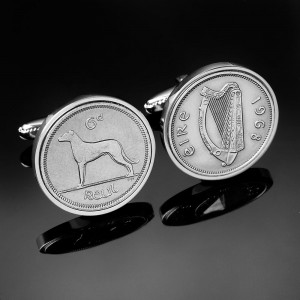 One thought on “Links to the Past”