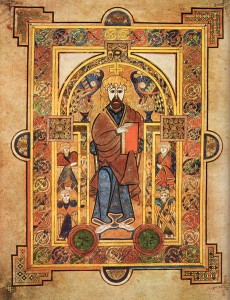 The beauty, symbolism and artistry of Celtic illuminated manuscripts makes them something to marvel at – that’s why the most spectacular examples of these ornate, medieval works of art (such as the Irish Book of Kells) are displayed in museums.

In fact, the most shining examples of this unique art form are considered priceless artifacts in the British Isles.

If you’re not familiar with these manuscripts and how they were made, you’ll enjoy learning about the care that went into these epic labours of love.

After all, each one was composed of beautiful text, written in the most careful and elegant hand, along with intricate borders, Celtic knot work symbols, and drawings of meaningful scenes that were embellished, or illuminated, with shining sections of precious gold leaf…

The addition of glowing gold (or sometimes silver) is really a defining characteristic of these illuminated manuscripts; often, they were written on vellum parchment.

By the 16th century, the first printing presses made these traditional masterworks obsolete, although the wealthy still commissioned them from time to time.

Today, there are a multitude of medieval illuminated manuscripts from Ireland, Scotland, and Wales, and many of them contain amazing examples of Celtic lettering, borders, and painting…

The Art of Illumination… 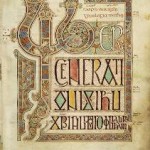 Painstaking attention to detail defines this art form; after all, only the best artisans could create the beautiful figures and backgrounds in these books, and then use mixtures of gold leaf and glue to add illumination to the designs.

As well, the designs found in Celtic illuminated manuscripts always had a spiritual focus; in fact, the gold leaf was believed to “exalt” the drawings and borders, adding a magical or supernatural aura to the pictures, patterns, and letters.

In the case of the Irish Book of Kells, which depicted four books of the Gospel (this ancient manuscript now rests at Trinity College, Dublin), Irish monks would have followed a traditional six-step process when creating the religious work.

First, the designs would be sketched with silver-point, and then the gold dust would be applied. At this point, a variety of bright colors, such as saffron, royal blue, and ruby red, would be added to the design.

Next, the main figures in the drawings would be detailed with outlines; after this step, decorative motifs known as foliates would be added to borders, and the manuscript would be finished with delicate coloring of the figure drawings.

Magical beasts, flawless calligraphy, and interlaced Celtic knot work patterns decorate the folios of the Irish Book of Kells, and these letters and symbols are quite common in Celtic illuminated manuscripts.

This type of decorative work is referred to as Insular Art, and it is unique to Ireland, Scotland and Wales. Most Insular Art was made during the early medieval period.

The distinctive knot work patterns found in this Gaelic masterpiece were designed to reinforce the meaning of the religious drawings they adorned; in fact, it is believed that the knot work designs represented eternity and faith, and the endlessness of life, death, and spiritual rebirth…

Other famous examples of Insular Art illuminated manuscripts in the Middle Ages include the Lindisfarne Gospels (from the eighth century) and the Scottish Book of Deer, which was created in the 10th century.

Experience Celtic Knot Work That Is Handmade In Ireland 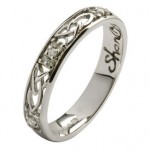 Honor your Celtic heritage on your special wedding day, by choosing a stunning Ladies Diamond Cluster Celtic Wedding Band that is crafted with the ancient symbols of your ancestors.

This diamond cluster design features beautiful Celtic Trinity Knots, which symbolize Father, Son and Holy Spirit. Precious gemstones add a touch of shine and shimmer to the piece, which is available in 14k white gold, or two-toned 14k yellow and white gold.

Classic and beautiful, our signature Celtic design is made by hand in Ireland, and stamped at the Assay Office of historic Dublin Castle.