Descended from the legendary Iberian, Míl Espáine , the Milesians were believed to be the first true Gaelic Celts of Ireland.

Míl Espáine (“soldier of Hispania”) lived the life of a nobleman and a warrior, and he sought out adventures and battles in Egypt and Spain.

This notable historical figure had a vision that he was meant to rule the Emerald Isle, and, as he matured, he strove to bring this dream into reality…however, he was destined to pass away before he could make it to the coastline of Ireland.

His wife and sons went on to bring his quest to fruition; along with their Milesian army, they invaded the Emerald Isle in the year 1000 (B.C.).

In time, two of his sons would rule in the Emerald Isle, each holding sway over one half of the country…in fact, it is believed that one of Mil Espaines son’s was the founder of the Fitzpatrick family. Today, many people with Irish roots can trace their ancestry back to the Milesians.

In Eurasia, Míl Espáine served the Scythian regent; in time, he was married to King Scythia’s daughter. However, once Espáine discovered that Scythia was acting against him, he punished his father-in-law for his treachery by taking his life.

Then, he made his way to Egypt, where he could finally be safe. Even though his first marriage was destroyed by royal intrigue, he remarried another high-born woman…this time, he chose the daughter of the Pharoah, Neferhotep. Together, they raised six sons.

At this point, Míl Espáine (also known by the Latin name, Milesius) began to explore the prophecy that he believed entitled him to rule Ireland. He sent out emissaries to explore the Emerald Isle; among them was his beloved uncle.

However, while the Irishmen who greeted these emissaries showed them great hospitality (in fact, the Egyptian group raved about the friendliness and charm of the Irish!), they were not naive; they were perceptive enough to know that this visit was in fact a reconnaisance mission preceding an invasion.

Knowing this, they eventually battled the emissaries, killing Míl Espáine’s uncle in the process. Hell-bent on revenge, Espáine stepped up his plans for invasion…while he never achieved his goal, his wife Scota (and his sons) did, and then the fate of Ireland changed forever…

The Origins of “Black Irish”

You’ve probably read descriptions of men and women who are called, “Black Irish” – but what does it really mean, and how does it pertain to the history of the Milesians? According to some historians, the rich coloring (dark hair and eyes, swarthier skin tone) of Black Irish people is inherited from the ancient Milesians.

There is some truth to this, as scientists who have mapped out DNA on bone fossils from excavations in Ireland have found traces of genetic material related to Spain and other Mediterranean regions.

However, there is some argument over the meaning of Black Irish – some feel it fits the description above, and others perceive Black Irish as featuring very dark hair, with very fair skin, and blue or green eyes. Whichever definition is used, people in the Emerald Isle don’t usually refer to themselves (or others) as “Black Irish” – this term is usually used by people from other nations. 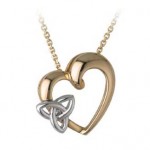 Crafted by hand in the Emerald Isle, this pretty design features an ancient symbol of the Irish; the Trinity Knot motif honors the Holy Trinity…each segment of the symbol represents Father, Son, and Holy Spirit…

A wonderful blend of ancient meaning and modern style, this pendant is the perfect way to display your pride in your own Celtic heritage.

Created from the finest 14k gold, this two-tone design is vibrant and unforgettable.

One thought on “Irish History – The Milesians”