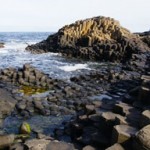 The scenic splendor of County Antrim, Ireland makes it one of the world’s most stunning areas of natural beauty…however, this Irish county has more to offer than picturesque vistas and romantic seascapes.

In fact, this Emerald Isle region offers plenty of things to see and do, for tourists of all ages and backgrounds…

Located in Northern Ireland, Antrim is just a short drive from central Belfast. Back in the early 17th century, when King Edward III held the English throne, Antrim was the scene of a historically significant battle between England and Ireland.

Today, Antrim proper has a rather small population of around 20 thousand people, the majority of whom practice the Protestant faith; its main attractions include nearby Giant’s Causeway, Shane’s Castle, Antrim Castle, and Springfarm Rath (a large, historic farmhouse).

Things To See And Do In County Antrim

Antrim Round Tower is a stunning edifice that dates back to the medieval period; this majestic tower is located on Antrim’s Steeple Road.

Measuring just over 91 feet in height, this 10th century tower was built by Irish monks, as part of their monastery. According to legend, this tower was the sight of a witch’s tragic suicide – as the story goes, she threw herself off of the tower to protest its construction.

Today, visitors to the Round Tower will also see a large rock known as “the witch’s stone”, which is said to mark the place where she landed.

Antrim Castle was built in the 16th century, by Lord Massarene, during the reign of England’s King James. Situated close to the shores of the Six Mile Water river, Antrim Castle is a perfect example of post-Restoration architecture.

The castle features stunning stone work, as well as unique, manicured water gardens (complete with ponds and canals surrounded by lush flowers and fauna) that complement the building’s design features. Located on Randalstown Road, Castle Antrim is a not-to-be missed jaunt that is really a trip back in time, to a more genteel era… 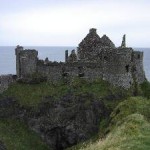 Located near Giant’s Causeway, close to the seaside enclave of Portrush, Dunluce Castle comprises the remnants, or ruins, of a formerly vast estate.

Situated on a rugged clifftop, the castle ruins offer breathtaking coastal views, as well as a glimpse of what a true Irish fortress (complete with watchtowers and turrets) encompassed.

To enjoy the castle, Giant’s Causeway (home to a marvelous natural rock formation that is truly unique), and other nearby attractions, consider a journey along North’s Antrim’s Coastal Causeway Route – this stretch of roadway makes for a stunning drive that is filled with gorgeous views and exciting things to do.

Popular activities for travelers on the Coastal Causeway Route include fishing, hiking, horseback riding, surfing in Portballintrae, and visits to museums and heritage centers, such as the Railway Preservation Society of Ireland (located in Whitehead). 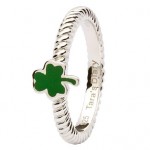 Saint Patrick used the three-leaf shamrock to illustrate the presence of the Father, the Son, and the Holy Spirit in the natural world.

Today, Celtic jewelry designers honor the legacies of the Irish by creating beautiful silver stacking rings that can be worn alone, or combine with other stack rings for a fashionable, layered effect.

Our enamel and sterling silver stacking ring is just one pretty and meaningful choice from our wide selection of Celtic and Irish stack rings.

Designed to be affordable and fun to wear, our Tara’s Diary Stack Rings are a wonderful new addition to our line of authentic Irish and Celtic jewelry; every piece we sell is handmade in the Emerald Isle, and assayed at historic Dublin Castle.