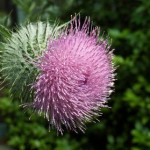 Every Celtic nation has its own flower, which is often used in emblems that appear on crests, coins, and flags.

Wales is often represented by the leek, but its actual national flower is the bright yellow daffodil.

Each national flower is the subject of lore and legend, so you may be interested in reading more about these symbolic blooms and the way they’ve grown intertwined with their particular Celtic nations.

While some of the stories that connect these blossoms to Ireland, Scotland, and Wales may be in the realm of fiction or fantasy, others are based on historical facts that are quite fascinating… 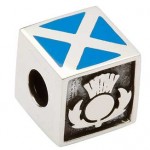 In Scottish legend, the purple thistle (now known as the Scottish thistle) protected a nation from Danish invasion!

According to this much-told, and possibly exaggerated account, Danish invaders were creeping into Scotland barefoot, ready to attack an army of sleeping Scots who snoozed away, blissfully unaware of the danger that was all around them.

Luckily, one Dane was doomed to step on the prickly thorns of Scottish thistles as he crept forward, and the spiky flowers made him cry out in pain.

The Scots woke up because of the din, and they were able to avoid being massacred by the Vikings in their midst.

Some notable examples of the Scottish thistle appear everywhere in modern culture – for example, before her wedding to Prince Philip of Greece, Princess Elizabeth (now Queen Elizabeth II) requested that all of the national flowers of the Commonwealth be emboidered on her lavish wedding gown – the Scottish thistle was added in silken threads.

The thistle also appears as the Emblem of Scotland, along with the Latin motto, “nemo me impune laecessit” (No one provokes me with impunity).

Celebrate your Scottish roots by adding a special Scottish Thistle Celtic Charm to your charm bracelet.

This design will fit onto any Pandora bracelet, but it’s specially made to decorate our Celtic Tara’s Diary Charm Bracelet. 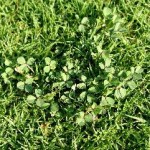 The tender, three leaf Shamrock is one of the world’s most recognizable symbols; all over the globe, people instantly link the green shamrock motif with the Emerald Isle.

Saint Patrick’s link with this humble plant is the reason why it has become the national flower of Ireland – according to legend, Saint Patrick believed that the three leaves of the shamrock represented the Father, the Son, and the Holy Spirit.

By finding a symbol of the Holy Trinity in nature, he preached that the existence of God was everywhere around him. Saint Patrick used the shamrock analogy to convert Pagans to Christianity during the Early Medeival Period.

Today, the shamrock appears on modern Irish jewelry designs, such as our Tara’s Diary Shamrock and Spiral Charm. 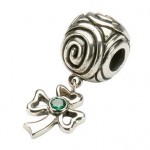 It also appears on the British Coat of Arms, and as the logo of Irish airline, Aer Lingus.

In fact, the Irish government has trademarked the shamrock, and they use the design to promote their country all over the world.

Sports teams in Ireland, such as the aptly named Shamrock Rovers, also use the motif on their team jerseys. 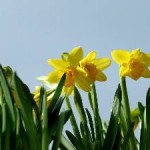 The sunny beauty of the Welsh daffodil is a pleasure to behold; however, the provenance of this beautiful blossom, as it relates to the history and culture of Wales, ia quite mysterious.

Some historians believe the Daffodil was chosen to represent Wales, because its Welsh name, Cenhinen Pedr, closely resembles the Welsh name for leek (Cenhinen).

The leek is another popular symbol of the country, and its origins as a symbol are also very murky.

However, one colorful legend points to an epic war between the Saxons and the forces of King Henry VIII; this battle was believed to take place in a leek field.

Today, the daffodil appears on St. David’s Day (Saint David is the patron saint of Wales; this holiday is celebrated every year on the first of March); on this day, tradition dictates that the Welsh should sport leeks or daffodils on their lapels. 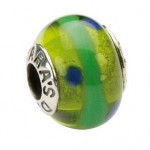 The bright, summery appeal of the Welsh daffodil is also captured in our pretty Tara’s Diary Green with Blue Dot Charm.

Celtic jewelry designs offer a wonderful way to enjoy the ancient symbolism of the Celts; our collection of affordable, sterling silver charms also make wonderful gifts for any special lady with Irish, Scottish, or Welsh ancestry.

If you’re curious about the symbols and history of your ancestors, be sure to view the entire Tara’s Diary Collection; every piece is bestowed with deeper meaning, and each design is crafted by hand in Ireland.