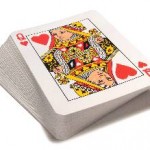 In May, Queen Elizabeth II made an historic visit to Ireland – this tour was the first visit by a British monarch since 1911.

The Queen’s visit to Ireland was greeted with much fanfare and praise -after all, the country had not received such an honor since it became a republic.

To many, this tour represented a long-overdue warming of the fraught, politically-charged relations between Ireland and England.

During this visit, the Queen’s itinerary was designed to show respect for the Irish people and to acknowledge the mistakes of the past. One highlight of Elizabeth II’s tour included a stop at the Irish War Memorial Garden, where she honored 50,000 fallen Irish soldiers, all of whom gave their lives during World War I.

Another meaningful moment occurred when Her Royal Highness laid a wreath at Croke Park.

This park is hallowed ground for Irish nationalists; during the Irish War Of Independence in 1920, British forces lashed out at the crowd during a football match…they fired guns into the stands, killing adults and children.

Since then, the Park has become an important symbol of Irish republicanism.

Other Highlights Of The Queen’s Irish Visit

A trip to Trinity College, Dublin was another highlight of the Queen’s Irish tour. While at the college, she visited the beautiful Long Library, and also viewed the medieval Book Of Kells.

This ancient illuminated manuscript was created by Irish monks – it depicts the books of the Gospel with decorative text, drawings, and intricate knot work borders.

In fact, this important artifact is considered Ireland’s most precious art treasure. The Queen was also treated to a special musical performance by harpist Siobhan Armstrong.

During a more informal phase of her Irish tour, the Queen was able to indulge her passion for horses by visiting the Irish National Stud Horsebreeding Center.

This Kildare, Ireland meet-and-greet allowed Her Royal Highness to talk with Irish jockeys and examine a variety of thoroughbred horses.

During this visit, the Queen also showed off a statue she had commissioned to mark the occasion of her Irish trip.

Of course, there will always be those who cast a cynical eye on the Palace’s outreach initiatives. One example of an anti-royalist who was deeply unimpressed by the Queen’s Irish visit is rock singer Morrissey (The Smiths).

In his viewpoint, the new tour in the Emerald Isle was simply a PR ploy to improve the Windsor family image after a fairly rough decade of scandal and upheaval:

“The Queen’s visit to Ireland is part of a new Palace PR campaign to re-invent the Windsors. The message from the Queen will be the same as ever: who we are born to is more important than what we achieve in life.”

With the afterglow of the Royal Wedding (where Kate and William provided romance and glamor to millions of viewers) still warming the hearts of the Queen’s subjects, the House of Windsor does seem to be undergoing a Renaissance.

However, for the Queen, duty is always the central concern.

Even Elizabeth II’s detractors must concede that she is a hard-working, ever-diligent monarch. As a young girl, the Queen experienced the bombing of London (and Buckingham Palace) during the Blitz – her parents King George IV and Elizabeth (The Queen Consort) were steadfast in their refusal to flee to a safer city.

For many royalists, the Queen’s sense of duty evokes a great deal of affection and respect… 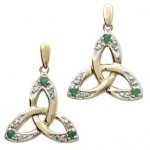 The Trinity Knot is the best-known knot work Irish symbol. Each of its three segments represents the Father, the Son, and The Holy Spirit.

On these delicate, handcrafted emerald-and-diamond earrings, the meaningful spiritual significance of the Trinity is honored and revered…

Our 14k Emerald and Diamond Trinity Knot Earrings are a wonderful way to connect with your own Irish heritage.

Every pair of earrings we offer is handmade in the Emerald Isle, by artisans who respect the traditions of masterful Irish metal work.

Your earrings will also be stamped in the Assay Office of Dublin Castle, one of Ireland’ s most important historical landmarks. For more Irish and Celtic jewelry designs, please visit our online jewelry store.