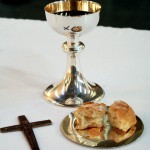 In Ireland and around the world, Catholics use Holy Communion to form a closer bond with Jesus Christ.

The symbolic wafers and wine of Holy Communion are meant to represent the body and blood of the Saviour.

By eating the bread and drinking the wine, those of faith unite with a higher power and demonstrate their belief in (and love for) Jesus.

Since Easter is approaching, it seems a fitting time to examine the history and meaning of Holy Communion.

The History Of Holy Communion

The roots of the Holy Communion, or Sacrament, rest in the pages of the Bible and its depiction of The Last Supper. Jesus attended this event alongside his disciples. This fateful gathering occurred before he was taken away, arrested, and crucified.

At the end of the Last Supper, Jesus held a piece of bread, tore it to pieces, and addressed his followers. When he spoke to the group around him, he said: “This is my body, broken for you”.

Next, he held a container of wine, and told his disciples, “This is the blood of a new covenant, poured out for many”. Today, these symbolic and heartfelt words have become the basis for the modern-age Holy Communion ceremony.

Christians would revisit the events of the Last Supper in their church rites. They would share the body of Christ and the blood of Christ through the passing of bread and wine. This rite honored the sacrificial nature of Jesus, as well as his belief in community, love, and compassion.

From its ancient roots, to the rituals of the present day, Holy Communion remains a powerful and sacred ritual which joins mankind with a higher power…

On Easter Sunday, many Irish citizens gather at local churches to commemorate the resurrection of Jesus. They attend sunrise services and take Holy Communion on this day. After Mass, Irish people retire to their homes and spend time with their loved ones and friends.

Often, a meal similar to a traditional Christmas feast is served at suppertime, and children are given chocolate eggs to mark the end of Lent.

Secular traditions, including the distribution of chocolate Easter eggs for children, do not spring from religious traditions.

According to the Church of Ireland, the two most important sacraments in a person’s life are the Holy Baptism and the Holy Communion, or Eucharist.

Religious Symbols Are An Important Part Of Irish Culture 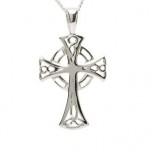 The strong spiritual traditions of the Irish emerged during the Middle Ages, when Pagan beliefs began to recede and the Christian faith grew stronger.

In particular, the Celtic cross remains a resonant and important symbol of love for God. These distinctive ringed crosses appear all over Ireland, and historians believe they were first created by monks in Irish monasteries.

At one time, these monks crafted crosses out of precious materials – however, the Vikings often pillaged their masterworks. As time went on, Irish monks began to use simple stone to create their crosses, because the heavy High Crosses were harder to steal and far less valuable.

Today, the Celtic cross motif appears on Celtic Cross pendants made by Irish artisans, who respect and carry on the faith of their ancestors…