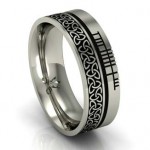 Ogham script looks like something straight out of Dan Brown’s bestselling novel, The Da Vinci Code – however, these ancient markings are uniquely Irish in origin (rather than Latin or Italian).

Back in the third century, the distinctive, seemingly cryptic groupings of horizontal and vertical lines known as Ogham script began to appear as an early Medieval, Ogham alphabet. This script was used to write Old Irish. Some historians believe that this written language dates back as far as the 1st century.

In the fifth century, usage of Ogham script was quite common…however, soon afterward, it was destined to begin disappearing into the mists of time…except for the historic inscriptions that still remain.

In Ireland, certain areas feature hundreds of these strange markings…Kerry and Waterford are just couple of examples. Often, the markings will appear on stone monuments or be carved into wood – the writing of names in Ogham script was a popular use of these Irish symbols.

Sometimes, Ogham script is also referred to as a Celtic Tree Alphabet – this sort of alphabet has an unusual naming system – every letter is named after a different tree. Today, these Ogham markings are still inscribed on stonework or wood in parts of the Emerald Isle, as well as (less commonly) Scotland, Wales, and the Isle of Man.

Many learned people believe that the Irish invented Ogham script for a very good reason – by crafting an alphabet of markings the Romans could not decipher, they gained access to a secret method of communication.

This “secret” language allowed the people of Ireland to share religious and political views (which might have opposed Rome’s interests) without being spied upon by those who understood only Latin.

In fact, the Irish have a long history of resisting Roman influence, as well as the influences of other countries, such as England – this is one of the reasons the culture of the Emerald Isle remains so distinct and easy to recognize.

Only those who understood the Ogham code could share its secrets …in time, many other people from the British Isles also learned the intricacies of this special Celtic Tree Alphabet…

Honor The Celtic Spirit With A Handmade Ogham Script Ring 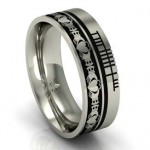 The beauty and mystery of Ogham script comes alive today in this exquisite silver Claddagh ring.

Ogham script is combined with other, time-honored symbols of Ireland, Scotland, and Wales, contributing to an original, unforgettable design that evokes the ancient past…

Every piece of Ogham script jewelry we offer is handmade in Ireland, by artisans who respect the old traditions. 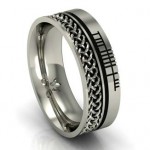 Sleek silver makes our stunning Irish jewelry amazingly affordable! You can enjoy the language and mystical motifs of your Celtic ancestors every time you wear your special Celtic ring.

Every ring we feature at our online jewelry store is handcrafted from fine sterling silver, and stamped at the Assay Office of Dublin Castle. You’ll be assured of the highest degree of quality and authenticity when you purchase one of our heirloom-quality rings.

These pieces can be worn as wedding bands, or simply as decorative designs that honor your own Irish, Scottish or Welsh heritage.