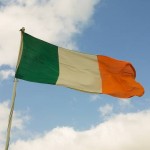 The national symbols of Ireland all carry a deeper meaning – one that intertwines thousands of years of Gaelic art, history, and culture.

For the Irish (and those with Emerald Isle ancestry), these special motifs evoke a sense of pride, spirituality and joy.

To help you understand more about the national symbols of Ireland and their significance, we’ve compiled a quick and fascinating guide to the most important designs.

Coat Of Arms Of Ireland (A Golden Harp And Azure Background)

Composed of a golden harp set against a deep-blue background, the Coat of Arms Of Ireland is one of the Emerald Isle’s most recognizable symbols.

Known as a Brian Bó Rúadh harp, this musical motif was named for a famous King Of Ireland. Featuring silver strings and gold leaf, the actual Harp of Ireland (also known as O’Neill’s Harp) dates back to the 10th century – it is now on display at Trinity College, Dublin.

In the Middle Ages, English royals used the Azure (blue) Harp crest to signify their claim to Ireland. King Henry the VIII also used this harp symbol to adorn gold coins minted for use in the Emerald Isle.

The harp itself hearkens back to the days of Ireland’s Bards. These poet-musicians played at court to entertain the nobility. They also passed down important historical information to the common people – by crafting educational ballads that were often set to the strains of lilting harp music.

Today, Ireland’s Coat Of Arms evokes the storytelling traditions of the Gaelic people…

This tricolor design combines three vertical stripes of green, white and orange. The symbolism of each segment tells a story about Ireland’s ancient conflicts…and its hopes for a peaceful future.

According to historians, the green stripe illustrates the ancient Irish traditions and their importance to the people of the Emerald Isle.

The orange section is indicative of the influence of William of Orange (William III of England) and his followers. This regent, known by the people as “King Billy”, won the crowns of Ireland, Scotland, and England following a battle known as the Glorious Revolution. He reigned with his spouse, Queen Mary, until the late 17th century.

In the center of the Irish flag, a strip of white illustrates a desire for peace between the two factions. This poignant tricolor arrangement is still a potent symbol of hope for a peaceful and united Emerald Isle.

The ringed cross of Ireland is an ancient symbol that dates back to the times after the Holy Roman Empire. Since the sixth century, this spiritual symbol has become synonymous with the Gaelic people.

Composed of four equal branches representing the four directions, as well as a central ring that is a remnant of Pagan Sun Worship, the Celtic Cross is used to mark graves and to honor Christ.

Today, the Celtic Cross remains a powerful symbol of faith – while it also appears in churchyards in Scotland and Wales, it is primarily associated with Ireland.

In fact, the monks of Ireland, who practiced a distinctive knot work style of art, known as Celtic interlace, were often the creators of the most beautiful and detailed Celtic Crosses.

Some of the finest examples of historically significant crosses appear at the ruins of an ancient Irish monastery, Monasterboice, which is located in County Louth. 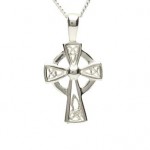 If you enjoy the significance of Ireland’s national symbols, why not show your pride in your heritage by choosing a lovely and authentic silver Celtic Cross pendant?

Crafted entirely by hand in Ireland itself, this stunning and traditional piece is adorned with another ancient Irish symbol – the Trinity Knot. Trinity Knots have three equal segments – each part represents the Father, the Son, and the Holy Spirit.

Faith, love, eternity, and the rich cultural legacy of the Emerald Isle are honored in the delicate lines of each Celtic Cross pendant. Fine sterling silver and sparkling CZ diamonds make this special design amazingly affordable.

2 thoughts on “National Symbols Of Ireland”