Home > Blog > Culture & Travel > All About Celtic Gods And Goddesses 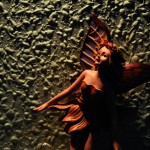 The gods and goddesses of Celtic mythology are many, and their colorful, epic legends endure to this day.

The Irish, Scottish, and Welsh deities hold some resemblance to Greek and Roman gods and goddesses – they are believed to have power over such realms as fertility, crops, victory in battle, and even sex and romance!

Like most god and goddesses, these deities could change form and behave rashly – and they did not hesitate to involve themselves in the affairs of the common people.

The Morrigan is the Celtic goddess of war, struggle, and fertility – in art, sculpture and verse, she is often depicted as a black crow. The crow-goddess flies over the bloody scenes of battle, as death and strife unfold on the ground below her. Known as a war goddess, the Morrigan is also depicted in the form of three goddesses (or a “triple” goddess).

Best known for her appearance in the seminal Irish mythological work, The Ulster Cycle, the Morrigan remains a powerful female archetype who embraced the heated state of “battle ecstasy”. According to legend, she fought and defeated the Firbolg during the 1st Battle of Mag Tuireadh.

This goddess and the myths associated with her are believed to stem from the Megalithic tribes. While many confuse The Morrigan with Camelot’s Morgan Le Fay, they are not the same, or associated with one another in any way. In fact, Morgan Le Fay’s first name is of Welsh origin, rather than Irish.

This Welsh god is also known by the name Arddhu, or sometimes Atho – The Green Man is depicted as a horned creature made of trees and of all of the woodland’s green plants. This magical deity’s domain is the forest – he is believed to have power over this natural realm.

This masculine god was a symbol of life-force and virility – his “body” was massive, like a giant’s, and he was made up entirely of foliage. If you’ve ever chuckled at The Jolly Green Giant, who is the mascot of a canned-vegetable company, you’ve seen a new and somewhat comical version of this ancient Welsh deity!

This Irish god’s name is pronounced as “Lu” – he is considered the regent of the distant past. Lugh is a heroic figure in Irish myths – he wields swords and other weapons with ferocity, skill, and deadly accuracy. In ancient texts, the story of Lugh’s gifts are celebrated – he tricks his way into the court of the Irish King Nuada by outwitting the doorman who tries to turn him away.

The Irish mythological work known as the Ulster Cycle presented Lugh as the father of Irish hero Cuchulainn, whom he fathered with Deichtine.

The magical powers of Lugh were proven when he healed his son’s battle wounds after Cuchulainn participated in violent combat with an opponent. This story is a famous one – the whole ordeal of Cuchulainn is told in The Battle Raid Of Cooley.

This Scottish goddess was a deity who was more commonly known as Beira, the goddess of winter. The words Cailleach Bheur mean “old woman” in the ancient Scots-Gaelic tongue. This goddess was beleived to have created many mountains in Scotland. According to legend, it was also the “old woman” who reigned over Samhain, the ancient Celtic festival (which is now known worldwide as Halloween).

Cailleach Bheur would appear on the eve of the first day of winter, when the spirits of those who had passed on were believed to be present. The common folk of Celtic lands learned to perform many special rituals on this night, so as to soothe the wandering spirits and appease the goddess, who is also known by the name, Carlin. 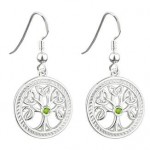 The power of nature, spirituality and life-force all come to life in the magical world of Celtic mythology. Today, designers of Celtic earrings capture the mystical essence of the great legends with their stunning creations.

These lovely earrings are crafted of affordable silver, and they also feature a shining green gemstone. Each circular drop earring depicts the Celtic Tree of Life – its roots symbolize the Underworld, its trunk illustrates the earhtly plane, and its branches and leaves represent the heavens.