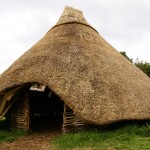 Have you ever wondered what your Irish ancestors wore in medieval times, or even further back in history?

The ornamental Irish garden design shown at left echoes the more primitive dwelling places of the Irish people…their clothing, shoes, hairstyles, and accessories all fit in with a style of living that was earthy and very practical.

However, then, just as now, there were divisions in society. Rich and poor lived vastly different lives, and therefore dressed differently as well.

Nonetheless, the lines and components of traditional Irish clothing were often quite original and easy to distinguish. Certain elements appeared on almost every person…and, sometimes, men’s and women’s clothing was basically interchangeable.

For a fun look at the clothing of the Irish throughout history, read on… 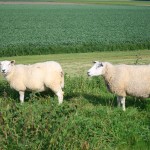 During the early 20th century, a bog in County Clare, Ireland proved to be the final resting place of some fascinating Irish garments.

One gown from this excavation was particularly interesting – it featured a scooped neckline, a gored skirt, and buttons on the underside of each sleeve.

This garment was not in perfect condition, so the whole length of the skirt remains a mystery, However, historians believe that these remarkably well-tailored garments were actually worn by both sexes.

Crafted of a woolen twill weave, this dress represents the typical style of the Irish Middle Ages.

Wool remained a staple of Irish men’s wardrobes before the days of unisex dresses. Historical excavations revealed a particular style of trousers, known as trews. These plaid or tartan pants were baggy on top, and tapered closely near the calf and ankle.

Tunics were often the top of choice for men during this era. These blouse-like designs were known as léines, and they hung over the waistline. Bell-shaped sleeves and yards of supple fabric were topped by another garment, known as a mantle.

Surely, these layers of fabric were designed to keep the rain and chill away from the body as Irishmen in the 12th century worked the land and did their daily tasks out of doors.

You could tell a lot about a man’s place in the world from the color of his mantle!

These cloaks were important possessions that separated farmer from nobleman! Irish Mantles would be fastened with decorative pins (the precious Irish Tara Brooch is one masterful example).

Often, a man would go barefoot while kitted out in all of this 12th century finery.

In fact, the English seemed appalled by the styles of Irish dress during this period. They sought to ban the wearing of plaid trousers, preferring the fine breeches of their own country to be sported by the men of the Emerald Isle. Naturally, Irishmen were resistant to the influence of their British Isles counterparts.

The 9th Century Featured Rough and Rugged Gear For Both Sexes

Even the ancient Irish people took an interest in their wardrobes, opting for carefully sewn and dyed skirts fastened in place with belts made of rough horsehair or other sturdy fabrics.

Leather was a popular choice for hats or headpieces, although they were sometimes also crafted from fine wool.

They had access to better dyes and they used these to adorn themselves in a rainbow riot of stylish kirtles and accessories. As well, their garments featured more embellishments, such as rich borders in contrasting fabrics.

Irish Metalwork Was A Master Art Used For Adornment 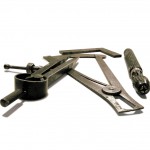 Even in past centuries, fancy hairstyles and a degree of vanity interested the Irish, just as it did those in other parts of the world.

A love for traditional Irish jewelry evolved through the eras, due in large part to the skill and artistry of Irish metalsmiths.

Rings, brooches, bracelets, pendants, and headpieces were glorious adornments that captured the essence of Celtic style. Silver, gold and bronze designs were often augmented with gemstones and intricate inlays. 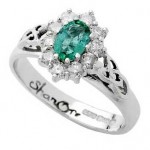 Handmade Irish rings are crafted with the same painstaking attention to detail…they offer the same symbolism, beauty, and lasting quality as medieval masterworks…

This Irish engagement ring is crafted from emeralds, diamonds, and fine gold…intricate Celtic knot work adorns the band, adding a touch of ancient meaning to this classical design…

Each Trinity Knot setting is a symbol of the Father, the Son, and the Holy Spirit…this lovely motif dates back to the sixth century…

One thought on “Learn More About Irish Traditional Clothing”