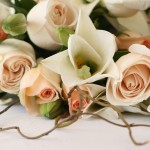 Romance, drama, passion, and notoriety are all highlighted in our list of history’s most famous weddings.

In fact, these star-studded unions often ignited lots of controversy.

In some cases, these memorable ceremonies really captured the spirit of the times…

If you love reading about Hollywood and the Royal Family, you’ll enjoy this juicy list of famous weddings.

The glamor and mystery of Elizabeth Taylor still endures today…from violet-eyed child star (National Velvet was her breakthrough role) to Hollywood temptress…this screen legend is known for her exquisite jewelry collection, her eight husbands, and her very real commitment to many worthwhile charities (such as AIDS research).

A fascinating mixture of good girl/bad girl, Liz was at the height of her powers when she met charismatic, rugged Welsh actor Richard Burton.

Of course, she was still married to Eddie Fisher then…and Richard was married to his long-suffering wife, Sybil…

Liz and Dick were kindred spirits…they traveled the world together, acted together, and tried (more than once) to break off their illicit relationship – for the good of their families.

However, this pair seemed destined for one another, and eventually, they dissolved the ties that kept them apart legally.

Then, they were wed…in Montreal, Canada, in 1967…Liz wore canary yellow and huge emeralds (bought by Richard)…her hair was a mass of tiny flowers. Dick smiled proudly in his suit, a bit dazed perhaps at marrying the world’s most famous woman. His womanizing days were over as he committed 100 percent to his new bride…

For years, they maintained their close bond, but, in time, cracks began to appear in their relationship. Richard wearied of Elizabeth’s entourage and her possessiveness…she tired of his black moods and his heavy drinking…

Their marriage ended in divorce in 1974. However, it’s commonly believed, and very likely true, that they were more in love with one another than they ever were with anyone else…for this reason, the ceremony that joined Liz and Dick as man and wife has become one of the most famous weddings in history..

Born in June of 1896, the charms of Bessie Wallis Warfield were destined to threaten a Royal Empire.

This American woman was twice-divorced, and considered wholly unsuitable as a legal wedded wife of the British King Edward VIII. When Edward proposed to Wallis after ascending to the Throne, it ignited a scandal and a constitutional crisis…

In December of 1936, the King gave his shocking abdication speech, one that underlined his decision to marry the woman he loved – no matter the consequences.

Restyled as the Duke Of Windsor by the new King (his brother, George VI – the subject of the critically-acclaimed film, The King’s Speech), he married Wallis Simpson half a year later…she became the Duchess of Windsor…

This couple continued to inspire heated public opinion throughout their time together…known as Nazi sympathizers, they earned the ire of the British government (and of many of its citizens).

After the wedding ceremony on June 3rd, 1937, the couple went on to lead the lives of socialites, and often visited with wealthy friends in America and Europe. No members of the Royal Family attended their wedding.

This romance seemed plucked straight from the pages of a glitzy contemporary romance novel…the famed New York Yankees baseball legend and the platinum-blond screen siren were married on January 14th, 1954.

Instead of a glamorous white gown, Marilyn chose a modest, chocolate-brown suit with a fur collar as her wedding outfit. The couple were married in judge’s chambers in San Francisco, with only 6 family members at their side…

DiMaggio, the son of Italian immigrants who were processed at New York’s Ellis Island, was in the denouement of his baseball career when he married Marilyn.

It was rumored that he missed the spotlight and found it hard to share his life with a woman who got more attention than he did.

These two strong personalities were destined to clash…Marilyn could be a different woman every day, and she was known for her capriciousness. The couple divorced in October of 1954, but remained close friends after their breakup. 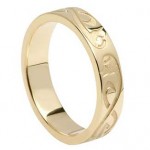 If you’re looking for a way to make your wedding romantic and memorable, consider choosing an Irish engagement ring or Celtic wedding band.

These styles honor your heritage, while also offering handcrafted quality that is totally authentic…

One thought on “History’s Most Famous Weddings”