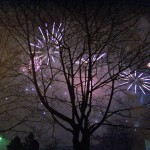 Throughout the centuries, the Irish people have celebrated the dawn of each New Year in a series of special ways.

Originally, the New Year was rung in during the end of October, during the Pagan festivals of Samhain.

Over time, Ireland converted to Christianity, and this hallowed date followed annual Christmas celebrations instead.

Today, the rituals of the past still offer a glimpse into Irish culture and tradition…many modern ways of celebrating the New Year can be traced back to the Middle Ages…

According to Irish superstition, the first person to enter your home after the clock strikes twelve on New Year’s Eve will bring some kind of special luck – whether good or bad!


If a tall, dark and handsome man is first to cross the threshold, this is a lucky portent! However, many Irish people dread the sight of a red-haired woman, who will bring all manner of trouble and complications.

It’s probable that this fear of redheads is derived from ancient superstitions regarding witchcraft.

Red hair was considered a “mark” of a witch, just as being left-handed or having green eyes might be looked on with suspicion by devout townsfolk. 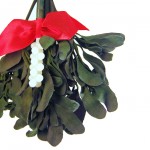 The magical properties of the tender mistletoe plant are often associated with Christmas – many people hold a sprig of this distinctive, white-berried plant over their heads, hoping for a kiss from a love interest…

According to Irish New Year’s traditions, women who tuck a bouquet of mistletoe under their pillows will receive special luck in love.

In the New Year, they will find their true love, due to the mystical powers of this romantic winter plant.

The poignant Irish New Year’s Tradition of honoring loved ones who have passed on still continues today. Many houses will feature an extra place setting, or multiple place settings, each one representing a deceased friend or family member.

In the past, the front door would also be left unlocked, perhaps to allow spirits to move freely in and out of the home.

Cleansing For The New Year

A fresh and spotless home is considered a conduit for luck in the New Year. Irish families will take pains to clean their homes meticulously, in the hopes that this immaculate environment will bring good fortune in the months ahead.

This sense of “cleansing” is spiritual – making room for new memories, new joys, and new luck is the purpose of this tidying ritual.

Can A Simple Loaf Of Bread Bring Good Luck? 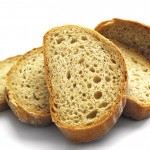 One fun Irish ritual to try this year involves a simple loaf of bread. For true authenticity, consider baking some Irish soda bread, which you can enjoy afterwards, with a nice cup of tea (or a pint of Guinness)!

Once you’ve found the perfect loaf of bread, bang it against the walls on New Year’s Eve.

This strange ritual is believed to scare away bad spirits, while also allowing good spirits to enter the home.

Other Ways To Honor Your Irish Heritage In The New Year 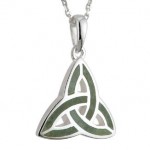 If you’re of Irish heritage, finding out more about the history, symbolism, and culture of your ancestors can be very fulfilling.

Many women enjoy choosing a special piece of Irish jewelry to ring in the New Year!

This Celtic pendant features one of Ireland’s most important and resonant symbols – the Trinity Knot has three identical segments, and each one represents the Father, the Son, and the Holy Spirit.

Themes of faith, eternity, and love are expressed in the pleasing lines of this knot work design, which is also inlaid with beautiful, dark-green marble.

Crafted by hand in Ireland, this affordable, sterling-silver pendant will become a lovely talisman as you move into 2011. Each design is stamped at historic Dublin Castle’s Assay Office.

Happy New Year from all of us at Irish Celtic Jewels!