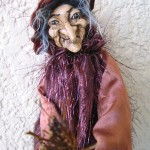 In Irish mythology, the country folk of the Middle Ages told stories of shape-shifting spirits who visited them in the dead of night.

Often, these magical creatures were believed to be witches or wizards. These dark beings had the ability to shift between human and animal forms…

Magical thinking and a lack of scientific knowledge and education were strong factors in the development of many traditional “scary” folk tales, ballads, and poems. These stories reveal the mindset of past centuries, as well as a fascinating glimpse into Pagan and early Christian lore and beliefs.

Today, the practitioners of the Wiccan faith carry on the rituals of Pagan Irish history and mythology. Nature worship and the divinity of the Goddess (as opposed to a patriarchal male God) are the fundamentals of Wicca, which focuses on incantations and rituals to honor the Goddess, the great outdoors, and the spirit world.

Often, modern-day Wiccans are viewed as some offshoot of Satanism – however, most Wiccans see themselves as just the opposite – in their own eyes, they embrace a peaceful, loving faith with a marked feminist viewpoint. In this sense, they revert back to the Pagan days of Ireland, before Saint Patrick and his ilk emerged to convert the country to Christianity. Back then, Paganism was commonplace.

The use of the pentacle in rituals is one reason why today’s Celtic Wiccans are wrongfully linked with Satan. However, the Pentagram is an ancient symbol, and its usage predated Satanism. In fact, this five-pointed symbol can actually be traced back to ancient Rome and Babylonia. 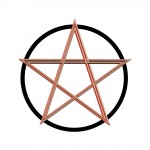 To Irish and Celtic Wiccans, the star-shaped Pentagram represents the four directions, along with a fifth, which is the spirit world. They use the pentagram to honor the divinity of the Goddess and feminine energy.

In Irish history, the barbaric practice of witch-burning was less common than in neighboring countries, including Scotland and England. The widespread practice of witchcraft never took hold in Ireland as it did in these countries.

After the Reformation, the Protestant segment of Ireland was thought to be the source of a new interest in witchcraft.

It was believed that a woman or man could not be a true witch or wizard unless they made a “deal with the devil” – some dark vow between a human and a malevolent spirit. Away from the roots of Paganism, the new concept of witchcraft and wizardry became associated with the enemy of Christ – Lucifer, or Satan.

Many stories in the Irish Mythological Cycle feature tales of shape-shifting and magical feats that reference witchcraft and wizardry.

Ancient Symbolism You Can Wear Every Day 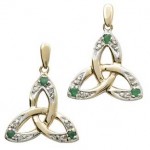 The Trinity Knot is a symbol of faith in the Christian God. Each of its three segments represent the Father, the Son, and the Holy Spirit.

Since the sixth century, this important Celtic motif has appeared on all manner of stone crosses, art treasures, and landmarks.

The Trinity Knot is styled in a particular form, known as interlace, or knot work – never ending lines flow into each other, demonstrating the interconnectedness of all things…

Celebrate the creativity and spirituality of your ancestors with these gorgeous Trinity Knot earrings. Each earring is adorned with sparkling diamonds and shining emeralds. This style is designed to catch the light and flatter your skin, eyes, and hair.

One thought on “Irish Mythology – Wizards and Witches”