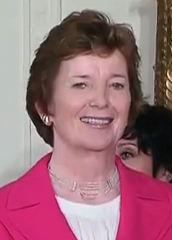 Mary Robinson was Ireland’s first female president. From 1990 to 1997, she held this esteemed office, and then she went on to become a United Nations High Commissioner. The achievements and ideals of Ms. Robinson have secured her place as one of Ireland’s most famous women…

The daughter of two physicians, Mary Robinson was born in May of 1944, in Ballina (County Mayo). Her ancestors were also politically active – her unique heritage featured a fascinating mixture of relatives from many walks of life- some were loyal Royalists, others were rebels… her ancestors had a wide range of disparate religious and political leanings.

From this potent genetic pool, she rose to become Ireland’s seventh Prime Minister (after an education which culminated in a barrister’s degree). Her excellence as a lawyer led to an appointment as a Reid Professor of Law at the prestigious Trinity College in Dublin, where she studied in her youth. Robinson is also an alumni of Harvard Law School.

Brave And Focused, Mary Robinson Always Stood Up For Her Beliefs

Born Mary Bourke, she became Mary Robinson when she married her fiance, Nicolas Robinson, in 1970. Her marriage to a Protestant caused tension in her family – her parents would not even attend her wedding ceremony due to issues with Nicolas’ religion. Although her family tree featured some Protestant branches, her parents considered themselves staunch Roman Catholics. In time, as the couple raised three children together, the Bourke family grew to accept the situation.

She began her career in politics in 1979, when she was elected to Dublin City Council. In time, Mary Robinson became known as a liberal with a thoroughly modern mindset. She lobbied for legal contraception, and much controversy and rancor were directed at her by more old-fashioned opponents. Many people blocked her efforts to make contraception legal and widespread in Ireland.

Always an idealist, Robinson persevered, fighting for the rights of women. During the Seventies, Robinson joined the Labour Party, after working for years as a senator. As well as fearlessly campaigning for the rights of those that society traditionally overlooked, she also battled against a controversial office building development, which would be constructed on top of a Viking historical site. Although the office building was eventually built (despite widespread protests), many people grew to admire the tenacity of Mary Robinson.

By 1989, Robinson was being groomed by the Labour Party as a candidate for the Irish Presidency. After a campaign which included a great deal of scandal, backbiting, and controversy, Robinson became the dark horse…she surged forward to defeat the Fine Gael candidate she ran against…many women came forth to support Robinson’s campaign. She was sworn in as President of Ireland in 1990, and she became a very popular and beloved leader…

Mary Robinson’s superlative intellect allowed her to balance all the elements of her new role…with great diplomacy, she forged stronger bonds with England, respected the desires of the Church, and also pushed forward with her own liberal agenda. Her adroitness was proof of her intelligence, vision, and ability. Even her opponents grew to admire her achievements. Robinson reinvented the role of Irish President, giving new meaning to a “rubber stamp” position.

Today, after a stint as United Nations High Commissioner, she serves as the first female Chancellor of The University Of Dublin. This formidable woman continues to break new ground and she will always serve as an excellent role model for new generations…

Honor Your Own Irish Heritage With Handcrafted Irish Jewelry 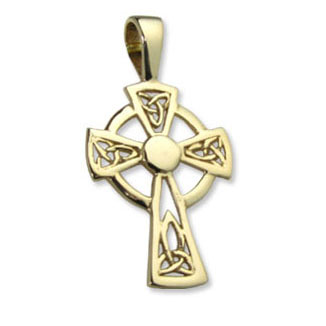 All over the Emerald Isle, Celtic Crosses rest in churchyards, evoking the spirit of the Irish people. Since the sixth century, these distinctive, ringed crosses have appeared as historical landmarks, as well as decorative elements on ancient manuscripts, art treasures, and monuments.

Today, Irish artisans create handcrafted Celtic Cross pendants that honor the past. These 14k gold crosses feature a wealth of Celtic symbolism (the ring of each cross is a remnant of Pagan Sun Worship!) and Christian meaning (the Trinity Knots decorating the cross at left symbolize the Holy Trinity).

To connect with your own Irish heritage, consider choosing a Celtic Cross pendant you can wear every day. These heirloom-quality pieces are handmade in Ireland and assayed at Dublin Castle.