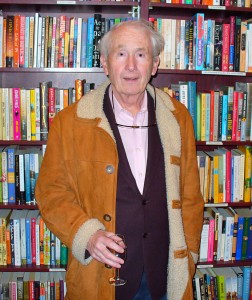 For many people, the experience of reading Frank McCourt’s poignant biography, Angela’s Ashes, is an unforgettable one. This Irish author’s unique voice earned him a (well-deserved) Pulitzer Prize for biography in 1997.

Born in Brooklyn, NY in 1930, McCourt was the son of immigrants from Ireland. In Angela’s Ashes, his family suffers through terrible poverty while living in the States – largely due to the impact of the Great Depression…as well as patriarch Malachy’s alcoholism. Malachy’s single-minded and selfish love of “the pint” did great damage to his wife, Angela, and to Frank and his siblings.

In time, the family moved back to Ireland to make a new start, but soon their fortunes declined instead. They lived on charity as McCourt’s father always seemed to drink away any wages he earned. The family experienced the grueling reality (which included social stigma) of being among Limerick’s very poorest residents.

The McCourts lived with family until they could no longer do so. Somehow, they then scraped together enough money to live in “the lanes” (the poorest possible living situation in Ireland at this time). In fact, their entire lane shared one outdoor lavatory, which was located right in front of the McCourt’s cheap rental rooms. In the book, the children refer to the upstairs room of their home as “Italy” – this romantic view of their new dwelling is punctured when a charity worker comes to their home and says it is more like “Calcutta”.

During the novel, McCourt adds little touches of humor to his depressing tale, lightening the darkness…he also celebrates the love he shares with his siblings, and with his decidedly flawed parents. This book also examines the hypocrisy and judgmental attitudes of those who gave the family charity – the class system is shown in all of its unfairness and its occasional ugliness.

Even while the family lived in the worst sort of squalor, there were moments of profound love, as well as frequent celebrations of Irish legends (including the adventures of Cu Chulainn), political history, and heritage.

In the book, young Frank’s intelligence shines through from the very beginning, and it seems to provide him with the strength he needs to make it through a harrowing childhood (one where begging, stealing, and picking stray bits of coal off the railroad tracks were everyday activities). Even at its darkest points, this biography celebrates hope…

After the success and critical acclaim of Angela’s Ashes, McCourt went on to write two other biographical works, ‘Tis and Teacher Man. Sadly, he passed away in 2009.

The Moving and Wonderful Words Of Frank McCourt…

After a hardscrabble existence in New York (he traveled there alone as a young man), Frank managed to get an education, and he began to teach. Always, he wrote in his free time, documenting his life story in his own inimitable style.

Frank McCourt married his first wife, Alberta (who appears frequently in ‘Tis) in 1961. They had a daughter, Margaret, then divorced in 1979. In the mid-Eighties, McCourt married for the second time – his bride was a therapist named Cheryl Ford. This marriage did not last.

In 1994, he married again – this time to a woman named Ellen Frey. They were still married when Frank passed away (from melanoma) in 2009. This famous Irishman was mourned by his family, his fans, and the media – he will always be missed. Luckily, the power of his writing (especially Angela’s Ashes – his greatest work) will live on forever…

Celebrate Your Own Irish Heritage With Beautiful, Handcrafted Irish Jewelry 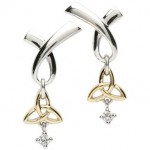 The Trinity Knot is an important part of Irish art, history, and culture. This symbol of the Holy Trinity is composed of three interlocking segments – each represents the Father, the Son, and the Holy Spirit.

The strong spiritual traditions of the Emerald Isle are celebrated in this pair of Trinity knot earrings, which feature silver and gold plating for two-toned dimension. CZ diamonds add a touch of shimmer to these affordable designs.

Each Trinity Knot is gently suspended from a sterling silver Ribbon of Life. Modern beauty and ancient meaning come together in this Irish jewelry design. Each pair of earrings is handmade in Ireland itself and assayed at Dublin Castle.