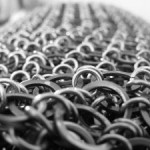 Pagan heroes, chariots, swords and magical spears…all were immortalized in Ireland’s famous Ulster Cycle – one of the four great cycles of Irish mythology.

In this seminal work, the Iron Age, (shortly before, or during the time of Christ) was revealed through an illuminating mixture of heroic deeds, tragedies, and supernatural feats.

80 stories were told in the Ulster Cycle (formerly known as The Red Branch Cycle), but its most famous tale is undoubtedly The Cattle Raid Of Cooley.

The Cattle Raid Of Cooley

In this story, Queen Medb of Connaught demands that her army steal Ireland’s most famous bull, which is currently in the possession of a chieftain in Ulster. The chieftain’s army is overcome with a terrible curse, and only one teenage boy, named Cu Chulainn, remains able to fight.

This young man, who was a nephew of an Irish King, is forced to battle against a close friend, who is likewise reluctant to battle Cu Chulainn.

The other warrior, whose name is Ferdiad, bemoans the cunning and greed of his Queen (in prose):

Woe to Medb, yea, woe to Medb,
Who hath used her guile on us;
She hath set me face to face
‘Gainst Cuchulain– hard the toil!”

The epic battle between these young men is unique – forced to fight one another or lose their honor, they try to battle without seriously harming one another.

They use potions and herbs to heal their wounds, and they share their mead and rations to keep their strength up.

With the help of the villagers, they remain alive, and evenly matched in battle (as they had always had been). In time, though, as the fight drags endlessly onward, Cu Chulainn does destroy Ferdiad, with a little help from a magical weapon…Cu Chulainn feels no glory in victory…only sadness at the loss of a friend…

The Mysteries Of The Ulster Cycle

Teutonic linguists decoded the meanings of this ancient manuscript. These German language experts were the first to discover the secrets of this veritable “window into the Iron Age”.

By unraveling the mysteries of The Ulster Cycle, they shed light on a Pagan world that has disappeared forever…

The world of Ireland’s Iron Age was a world where many small kingdoms fought for dominance. In a sense, the nation was in turmoil, always divided by different factions.

This warrior society valued strength, honor, and bravery above all. The shape-shifting and magical elements in The Ulster Cycle added drama – and a sense of the divine – to written depictions of battle, suffering, and strife.

The men and women of The Ulster Cycle were mortals – they could die. Although magic was there to protect and serve them, they remained subject to human laws.

By combining Pagan warrior spirit with a little touch of magic, the authors of these ancient stories inspired Irish men to prize valor and victory above all else. In fact, these tales can be seen as motivational…

If you’ve never read any ancient texts, you should consider checking out a modern translation. Reading a story or two from The Ulster Cycle can be a wonderful way to connect with your own ancestry.

Drinking in the language, poetry and spirit of your own people can lead to a deeper understanding of your own origins…

Another Way To Honor Your Irish Ancestry… 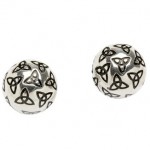 The ancient Trinity Knot is composed of three interlocking segments – each one represents the Father, the Son, and The Holy Spirit.

These Celtic earrings are engraved with tiny Trinity Knots, which add dimension and richness to fine silver beads.

Each earring is crafted by hand in Ireland itself, and stamped with an Irish Hallmark at Dublin Castle’s Assay Office.

For true quality and authenticity, handmade Irish jewelry is second to none – and silver makes it so affordable.

For a look at more Irish designs, please browse our convenient, online Irish jewelry store. Choose a little piece of history you can wear every day!